Six weeks ago, the tsunami devastated Tamil Nadu, killing thousands of people and leaving many thousands more without families, homes and livelihood.

rediff.com correspondents travel to the districts most affected by the catastrophe to find out how the administration is coping with the aftermath and how the survivors are rebuilding their lives. An ongoing series, which begins today: 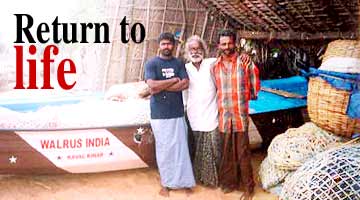 Nearly one-and-a-half months and Rs 540 million (Rs 54 crore) in relief and rehabilitation after Tsunami Sunday, coastal areas in Tamil Nadu are limping back to normalcy.

When you enter Kanyakumari -- mainland India's southern-most district -- from neighbouring Kerala, Thuckalay is not very far from the border town of Kalliyakavillai.

After you pass the town, there is a small hospital. On the ground floor, 11 girls who lost their parents to the water's wrath are living in what is now the government home for adolescent girls. They can stay there till they find a job, or get married. The government is giving the girls vocational training to help them earn a living. It has promised them Rs 3 lakh (Rs 300,000) if they want to start a business or a family.

The girls say they were happier in the relief camps where they had the younger children to look after and play with. The children have been shifted to the district authority's tsunami orphanage in Nagercoil. Kanyakumari District Collector Sunil Paliwal says both shelters are temporary, and that a new building will be built, which would house the children as well as the older girls.

The Nagercoil orphanage is noisier as the children liven up the ambience as only children can. Slightly older children are attending schools outside. District Social Welfare Officer Uma Maheshwari says a primary school will come up within the compound soon.

The tsunami children will be looked after till they complete the 12th standard. The government has promised Rs 5 lakh (Rs 500,000) per child. The children will get the money, along with interest, when they turn 18. They will also have the option of living in the adolescent home till they are 40 years old.

The affected people have been shifted out of relief camps into 100 square foot temporary homes. The shelters, made of fireproof board, get too hot during the day, say the villagers. A non-governmental organization called SOS Village has set up 100 temporary houses, which are bigger, have higher roofs, and cross ventilation to keep them cool. It has also given the families food and ration -- stoves, utensils, rice, oil and pulses -- for a month.

The state government has identified the land for constructing permanent homes for the tsunami hit people. Officials say the homes will be ready in a year's time.

Also by A Ganesh Nadar: A story of true grit from Colachel

The water claimed 824 lives in this district; 12 people from outside the district, three from Kerala and a Bengali also died here. Ten bodies are yet to be identified, 123 people are still missing. The government promised Rs 1 lakh (Rs 100,000) to the families; 740 cheques have been issued so far.

Most of the affected people are fisherfolk. The government said it would replace and repair all the boats and nets. That work has just begun. For the smaller catamarans the government is giving Rs 10,000 for repair and an equal amount for the nets. For the slightly bigger vallams it is giving Rs 20,000 for repairs and Rs 15,000 for the nets. For the big boats the government has promised bank loans with a 35 per cent subsidy. The rest will be a seven-year loan at a low interest rate. They don't have to pay back the loan for the first 18 months. Some NGOs have also promised to help get boats and nets.

To help the people overcome the trauma, the government has set up four counselling centres manned by personnel from the National Institute of Mental Health And Neuro Sciences, NIMHANS, Bangalore. They are training volunteers to work with the fishermen.

The Kanyakumari collector is settling the bills of the 29 private hospitals that had treated the tsunami victims, and raises the money through donations from the public. This correspondent saw Paliwal instructing his officers to refund Rs 25,000 to an old woman had paid to a private hospital. The woman had come to Paliwal in tears, saying she could not afford paying such a huge sum.

People who wish to donate to the collector can send drafts payable at Nagercoil and drawn on The Collector, Kanyakumari (Tsunami relief fund).

What the survivors need: Please help!