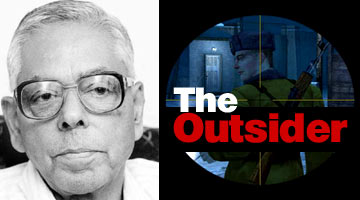 Hormis Tharakan is the second outsider to be brought into the organisation to take over as the chief after superseding an insider.

A S Dulat was the first. He was brought in from the Intelligence Bureau because the Atal Bihari Vajpayee government considered R Nagarajan, an upright officer, who, however, had the reputation as an over-cautious risk-avoider, to be unsuitable to be the chief.

Dulat was attached to R&AW nearly six months before the superannuation of his predecessor so that he could understudy him and learn the job before taking over.

When he joined, there was considerable hostility to him among insiders and there was unhappiness in the organisation over an outsider being brought in to take over as the chief.

Dulat joined the organisation with many handicaps. He was a stranger to many officers and to the junior and middle level staff. He had never served in the organisation before. Apart from a posting at the Indian embassy in Kathmandu, as the IB officer in charge of security, his exposure to external matters and to external intelligence collection was limited.

But he also had many qualities which were to stand him in good stead. He was an extremely warm-hearted, affable and open-minded person, who could easily befriend others.

Even though his exposure to external intelligence was limited, he had done outstanding work in the IB as an operative, particularly in Jammu and Kashmir, and he was an officer of tremendous humility.

He understood that there would be unhappiness in the organisation because of his induction and made determined efforts to remove the hostility to him and to befriend the insiders. He identified the capable insiders and delegated powers to them.

It was said that even many insiders who had become R&AW chiefs before him had not defended the interests of the R&AW as stoutly as he did. In no time, helped by his positive qualities, he established excellent relations with his counterparts in other countries and came to be regarded as a close personal friend by many of them, including George Tenet, the then chief of the US Central Intelligence Agency.

He also saw to it that he was succeeded by an insider. The morale and elan of the organisation improved tremendously under his stewardship and he was the toast of R&AW when he left.

Could Tharakan do a repeat? It is reported that there is some unhappiness in the organisation over his induction, though not to the same degree as there was when Dulat was inducted.

Moreover, Dulat was a total outsider, but Tharakan is not. He had done two spells in R&AW covering a total period of about eight years and made a name as an expert on Sri Lanka and Nepal. He has many friends and well-wishers in R&AW and in the community of retired R&AW officers.

During his second spell, the organisation was keen to induct him into the RAS in view of his outstanding performance at headquarters and in the field, but he declined to join the RAS and preferred to return to Kerala and await his turn as director general of police.

Tharakan shares many of Dulat's good qualities. He is warm, affable and open-minded with an easy knack of making friends.

In contrast to Dulat, he has had a wide exposure to external intelligence, as an analyst as well as an operative. He has pleasant memories of his past association with R&AW.

Will he succeed as well as Dulat in removing the unhappiness in the organisation and in restoring its morale and elan? It is difficult to say at this moment. Unless given an extension, he will have only five months at his disposal.

Moreover, one has to see to what extent he will be able to defend the interests of R&AW, while working under the over-all supervision of M K Narayanan (in main image), the new national security adviser, who should be taking over the task performed by the late J N Dixit as the chief co-ordinator of the intelligence community.

Both Dulat and R&AW were fortunate that Brajesh Mishra, as the NSA, was the chief coordinator.

He was from the Indian Foreign Service, who had no favourites in the intelligence community. He was extremely fair and objective and shared Dulat's belief that everything must be done to restore the morale in R&AW and that nothing should be done which could further damage it.

As a former IFS officer, Mishra came to office as the NSA with mental reservations about the performance of R&AW.

When he had an opportunity of closely overseeing its work, he realised that his past reservations were ill-founded and he became a strong backer of R&AW. During an informal discussion, one had once heard him rating the quality of the performance of R&AW as above that of the IB.

It used to be said that the post-1998 role played by R&AW in helping the government mend fences with China made him think very positively of it. All this helped in restoring morale.

Narayanan is one of the most outstanding officers produced by the IPS and the IB. He had spent almost his entire career in the IB and some months as the chairman of the Joint Intelligence Committee, when V P Singh was prime minister.

He is an icon in the world of Indian intelligence and is held in high esteem in the international intelligence community. He is loved and worshipped by younger officers in the IB.

However it is said that one could not say the same thing about his equation with R&AW.

Rightly or wrongly, Narayanan is perceived in large section of R&AW as someone, who as a young assistant director in the IB in 1967-1968, opposed tooth and nail the bifurcation of the IB and the creation of R&AW.

It was said that he belonged to a small group of IB officers headed by the late M M L Hooja, the then DIB, and the late Anand Dave, the then Director, ARC, who opposed the creation of R&AW and created many difficulties in the way of its smooth functioning.

They reportedly considered the creation of R&AW as a greater humiliation to the IB than the Indian debacle in the Sino-Indian war of 1962.

Many IB officers of the 1960 vintage and their followers still articulate the following views:

It was wrong on Indira Gandhi's part to have bifurcated the IB;

It was wrong on her part to have ordered the dilution of the number of IPS officers in R&AW;

It was wrong to have created the RAS;

it was wrong on the part of Indira Gandhi to have made R&AW exclusively responsible for liaison relationships with foreign intelligence agencies; and

Either R&AW should be re-merged with the IB or it should be divested of the responsibility for the collection of intelligence in India's neighbouring countries and this task should be given back to the IB in view of the close linkages between our internal security and the developments in these countries.

Even 37 years after the bifurcation of the IB, these views keep cropping up from time to time from IB officers.

Would Narayanan allow his sense of fairness and objectivity to be clouded by his loyalty to the IB and his close friendships there? Does he still nurse the post-1968 bitterness? If he tends to take decisions which favour the interests of the IB over those of R&AW, to what extent will Tharakan be able to resist it?

These are questions which keep troubling the minds of large sections of officers in R&AW.

To be fair to Narayanan and the IB, it must be said that when Kao was senior adviser to Indira Gandhi in the 1980s and Gary Saxena to Rajiv Gandhi subsequently, there were similar reservations in the minds of the IB and its officers. There was a perception in their minds that the hearts of Kao and Saxena were with R&AW.

Next: The final analysis