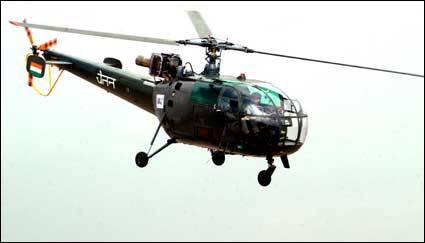 Chetan, the upgraded version of Chetak helicopter, made a successful inaugural flight in Bangalore on Tuesday.

It received a major boost when HAL's Cheetal helicopter (the Cheetah helicopter with a different engine) created a world record by landing at an altitude of 25,150 feet on Saser Kangi peak, next to the Siachen glacier.

Chetan has been fitted with a powerful Snecma TM 333 2B2 engine, which also powers Dhruv, the Advanced Light Helicopter, officials said.

Chetan can be seen at the Aero India show to be held in February.