Was Bandung in vain? 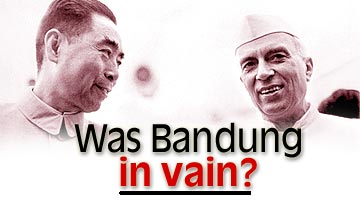 Few references have been made in the Indian press about the Bandung Conference which opened on April 18, 1955. However, this event is considered to be the beginning of the non-aligned movement and the first step of Communist China into world affairs.

In many ways it marked a new era, bygone now.

Today China is on the centre stage of world affairs and the non-aligned movement is defunct.

The Conference happened a few months after Nehru's visit to Beijing (October 1954) which was the culmination of the Hindi-Chini Bhai Bhai honeymoon. A few months earlier, Tibet, a nation 'verging on independence' (to quote Nehru) had been sacrificed on the altar of the Five Principles.

At the beginning of 1955, the Dalai Lama returned to Lhasa after having spent several months in China to discuss his country's fate with Mao and his comrades. He had received definite assurances from the Great Helmsman that 'Communist reforms' would not be immediately forced on the Tibetan people and that Tibet would be granted real autonomy.

A few days before the Conference, the world media was full of the mishap of the Kashmir Princess, an Air-India Constellation aircraft which crashed in the Indian Ocean on April 1. The plane was on a chartered flight from Hong Kong to Djakarta carrying an advance party of the Chinese delegation to the Conference. Eyes turned immediately towards Formosa which was accused on having sabotaged the aircraft. The Cold War was at its peak.

For Nehru, the Conference was the culmination of his personal ambition. He had always wanted to be at the centre of the newly decolonised nations.

On his return to India, he immediately conveyed his excitement to his old friend Edwina Mountbatten. He was deeply emotional about the event: 'My dear Edwina, Bandung has been so full of impressions that I have to write at great length about it. It was an exciting Conference. The variety of human beings represented there was itself rather fascinating. We had practically every country in Asia represented, and then there were people from the Gold Coast, Sudan, Libya, Liberia and Ethiopia, in addition to Egypt. Merely to see this motley gathering, all assembled there with a semblance of common purposes, was rather a moving sight.'

'Then,' Nehru write, 'of course, there were crowds of other folk -- many hundreds of pressmen from all over the world and hundreds of other persons who had come just to meet the delegates or try to influence them for some particular purpose. I said on the last day that Bandung had become for a week the capital of Asia and Africa. There was some truth in that.'

The Indian prime minister had nevertheless to admit that everything had not been rosy at the Indonesian beach resort: 'Then, there was the political interplay and backstage intrigues. Quite a number of people there were permanent performers of the UN and they functioned with all due pomposity. A tightly knit group represented, if I may say so, the United States policy. This consisted chiefly of Turkey, Pakistan, Iraq and Lebanon. Also, of course, the Philippines and Thailand. These two were at least somewhat moderate in their expression. The other four were quite aggressive and sometimes even offensive. A threat was made out that the Conference would be broken up if their viewpoint was not adopted.'

Nehru was thrilled to be able to introduce his 'friend' Zhou Enlai to the other Asian and African leaders. Later he declared with false modesty: 'At the Bandung Conference, it was not India's purpose to seek the limelight. Some newspapers, especially in India, naturally played up India's role. We felt, however, that it was better for us to work quietly. The fact, however, remained that the two most important countries present at the Bandung Conference were China and India.'

For Nehru, Zhou Enlai was the star performer: 'He was the mysterious figure representing a country which was playing an important and perhaps dangerous part in the world, and both, those who were favourably inclined to him and those who were bitterly opposed, were anxious to see him and measure him.'

How Nehru let us down

Nehru found him 'quiet and restrained' but determined: 'Altogether he created a very good impression. Even his opponents melted somewhat and agreed that he was an attractive person. Only once, in a subcommittee, did he speak rather curtly and said that China was not going to be bullied.' (Ironically he had got irritated with Pakistan which since then has become China's all-weather friend!)

Though Nehru (and the Indian press) thought that the Conference was a great success, this opinion was not shared by everybody.

It is worth quoting from the minutes of a meeting between Zhou, Nehru and U Nu, the Burmese president: 'In the course of my conversation with the Chinese prime minister and U Nu, the former asked me about the next session of the Asian-African Conference. There was talk of this being held in Egypt. What did I think about it? He also asked me about a proposal to have a liaison office. He thought that some such liaison office might be desirable.'

U Nu, who was not considered to be in the US camp, immediately retorted that 'his mind was quite clear that there should be no kind of organisation or liaison office. Further that if another session of this Conference was held, he had decided not to send any representative of Burma to it He was firm about it.'

Nehru pointed out that despite the difficulties and differences of opinion, the net result of this Conference was very good, particularly the fact that so many head of states had been able to meet for the first time. Zhou agreed with him, but 'U Nu refused to agree and said that the Conference only brought out differences of opinion and even the resolutions passed indicated that.'

He added: 'What was the good of repeating platitudes?'

'Nobody believes Nehru was beyond mistakes'

Though the purpose of the Conference was not to discuss 'small matters', Tibet was mentioned a couple of times by the Chinese premier.

Once during a conversation with the prime ministers of Ceylon, Pakistan, Indonesia and Burma, Zhou was asked if it was his intention to push Communism into Tibet. Zhou laughed and explained: 'there could be no such question as Tibet was very far indeed from Communism. It would be thoroughly impracticable to try to establish a communist regime in Tibet and the Chinese government had no such wish.'

He added: 'Tibet is an autonomous region of China and they (Beijing) have no desire whatever to interfere with its customs or ways of life. They have gone to Tibet because it was an integral part of the Chinese state and because it had been used for imperialist intrigues!'

Nehru commented in his notes that this was meant for 'the British recently and previously Czarist Russia.'

On another occasion, Zhou told his interlocutors: 'Either you do not know the nature of what Tibet is today, or the nature of socialism, when you put that question to me. You cannot introduce socialism or Communism into Tibet, you just cannot do it; maybe 50 years, 100 years later they may do it, I do not know.'

The years following the Conference, the Chinese Liberation Army remained busy consolidating its strategic occupation of Tibet, building several roads (one of them is the Aksai Chin road) and airstrips. Obviously, 'reforms' could be postponed for a few years.

Fifty years later, while the Dalai Lama is ready to accept to settle for a 'genuine autonomy' within China, 'socialism with Chinese characteristics' (or in others words 'capitalism') is forced on the Tibetans.

Where has the Spirit of Bandung vanished?

Zhou's promises and Nehru's ideals today seem dead and gone. 'The Wretched of the Earth' are no longer centre stage, business is.

Last fortnight in Bangalore, when a Tibetan youngster tried to attract the Chinese premier's attention and tell him in a non-violent way that Tibetan 'customs and way of life' were not always respected in Tibet, he was termed as a 'miscreant' by the ministry of external affairs spokesman.

Apart from the non-aligned movement, the Bandung Conference had many other avatars.

In the West, particularly in France and the US, the governments were very suspicious of the outcome of 'the Third Estate of the World.' But the Bandung Spirit spread amongst Leftist intellectuals like Jean-Paul Sartre or Franz Fanon who believed in the utopian concept of absolute freedom requiring total revolution and use of 'absolute violence' to purify the past. Fortunately most of these violent offshoots died with Mao and his Great Proletarian Revolution.

Fifty years after Bandung, old colonialism has disappeared, but the disparities remain. In many cases, new tyrants or dictators have replaced the old colonial powers.

For millions of people, the hope for a better world still has to materialise, particularly in Africa.

In a recent article on the Conference, Le Monde wrote: 'Everybody is satisfied with this situation: the local despots who are left alone with their 'deals' and the ex-colonisers happy to take revenge on Bandung and preserve their influence on Africa.'

In the meantime the drifting apart of the Asian and African continents accelerates. The 1980s saw the beginning of Asia's resurgence, while Africa continued to sink deeper and deeper into poverty and corruption. Where is the Afro-Asiatic solidarity today?

A tsunami seems to have washed away Bandung, though the question can be asked: did the Spirit of Bandung ever really exist?