'Why do Saudis kill innocents?' 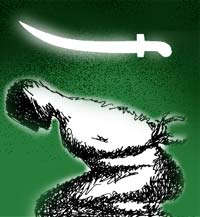 Pray for me. I will be killed after a few hours."

It was the morning of February 22, 2005, when the phone rang. Ramla was hoping to hear some good news when she heard her husband's voice at last. Naickam Ittiparambil Shahjahan had languished in prison in Damman, Saudi Arabia, for five years, awaiting a reprieve from the Saudi authorities, sparing his life.

But that was not to be. Shahjahan was beheaded a few hours after he called his wife to say goodbye forever.

"I do not know why they killed him. Why has Allah done this to us?" laments Ramla.

Shahjahan's execution has plunged his family, which grapples with poverty every day, into grief and helplessness.

Five days after his execution, the ministry of external affairs in New Delhi received a message from the Saudi Arabian government, which officially admitted that Shahjahan was 'innocent.'

"This is the first such official revelation of executing an innocent foreign national in any country in the world," says human rights activist Mukundan C Menon.

Shahjahan is one of dozens of Indians who are beheaded in Saudi Arabia, where some 1.3 million Indians work.

No official numbers of executions are available from the Saudi government. But according to human rights groups, the kingdom has executed at least 17 people this year. At least 35 people were executed last year; 53 people were beheaded in 2003. Among them some 18 Indians.

"The increasing number of executions are the biggest risk Indians face there," points out Menon, secretary general, Confederation of Human Rights Organisations.

Titled Bad Dreams: Exploitation and Abuse of Migrant Workers in Saudi Arabia, the report said foreign workers, who comprise one-third of the kingdom's population, face torture, forced confessions and unfair trials when they are accused of crimes.

'The victims include skilled and unskilled workers; Muslims, Hindus, and Christians; young adults travelling outside their home countries for the first time; and married men, and single and divorced women, with children to support,' Human Rights Watch said.

The report revealed the abysmal and exploitative labour conditions many workers face, and the utter failure of the Saudi judicial system to provide redress.

Next: What was Shahjahan's crime?