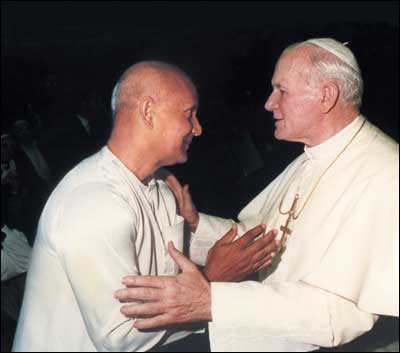 Among the many Indians who met Pope John Paul II is the spiritual leader Sri Chinmoy, who met the Pontiff six times.

Recalling the meetings, Sri Chinmoy described the Pope as 'humanity's grandfather, father and brother'. 'Knowing that I come from a Hindu family, the Holy Father made me feel that his heart is so large that it can accommodate all the religions of the world.'

At their third meeting in the Vatican on November 30, 1988, Sri Chinmoy presented a song to the Pope he composed about the Holy Father entitled, 'Salvation Delight'. 'He was at once unity's duty and multiplicity's beauty,' Sri Chinmoy said.

Complete coverage: The Pontiff passes on