Three Indians who will vote for next Pope 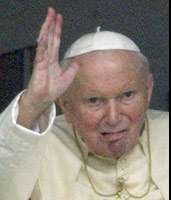 Catholics around the world are speculating about the election of a new Pope following Pope John Paul II's critical health condition.

There are five Indian Cardinals, but only three have the voting rights to elect a new Pope.

The Pontiff suffered a cardio-circulatory collapse after he developed high fever brought on by a urinary tract infection and throat surgery.

Church circles expect the Pope -- who will turn 85 on May 18 -- to pass into the ages any day now. He has already been administered the last rites -- better known as the sacrament of the sick.

Any Catholic man can become Pope, regardless of whether he is a priest or not. But convention dictates that the new Pope comes from the Cardinalate.

When the Pope dies, the administrator of the property and the revenues of the Holy See -- who is known as Cardinal Camerlengo -- first verifies the Pontiff's death. This is done by striking the Pope's forehead gently thrice with a silver hammer and asking him, using his Baptismal name, whether he is dead.

If there is no response from the Pope, the Camerlengo solemnly announces his death. He then removes the ring from the dead Pope's finger. This ring, along with the papal seal, is broken, and the Pope's bedroom and study are sealed.

Then follows a nine-day period of mourning, known as novemdiales, during which novenas are said and the Camerlengo (who is now in charge of the Church until a new Pope is elected) arranges the funeral.

The Camerlengo soon calls a Conclave of Cardinals who will meet in the Sistine Chapel in the Vatican. The Conclave now consists of 115 Cardinal electors, who elect the Pope in utmost secrecy.

In fact, the Cardinals were at one time literally locked in the Sistine Chapel, where the voting takes place; nowadays they are allowed to sleep in special apartments.

Upon entering the Conclave, the Cardinals take an oath of secrecy; the penalty for breaking the oath is automatic excommunication.

The election process generally begins between 15 and 20 days after the Pope's death.

The Cardinals are given paper ballots inscribed with the words, 'I elect as Supreme Pontiff' with a blank area for them to write their preference. Each Cardinal in order of seniority places these ballots on the altar.

If after voting for three days, no Pope has been elected, a day is taken for discussions, rest and prayer. Then voting resumes. If seven more days pass with no decision, there is another day of rest and prayer.

Another series of seven ballots is held, followed by another day of rest and prayer, if necessary.

Then again, another series of seven ballots is held. At this point, if still no Pope is elected, they may elect a Pope by absolute majority (50%+1 instead of the two-thirds majority) or decide to vote only on the two candidates who ranked first and second in the most recent tally.

India has five cardinals; but only three of them have voting rights. Two of them -- Cardinal Duraisamy Simon Lourdusamy and Cardinal Simon Ignatius Pimenta -- have lost the right to participate in the conclave as they are above 80. Only cardinals below the age of 80 have the right to elect the Pope.

The three Indian cardinals with voting rights -- Cardinal Ivan Dias of Mumbai, Cardinal Varkey Vithayathil of Ernakulam-Angamaly and Cardinal Telesphore Toppo of Ranchi -- will travel to the Vatican soon after the Pope's death is announced.

"Cardinal Ivan Dias does not like to comment on speculative reports," the office of the Mumbai archbishop said when rediff.com tried to contact him about recent media reports that he is one of the probable candidates for the Papacy.

BusinessWeek, in an article titled Why The Next Pope May Be A Surprise felt that Cardinal Dias is one of the probable candidates among the prelates from Asia, Africa and Latin America.

Ordained on December 8, 1958, in Mumbai as a Catholic priest, the 69-year-old Cardinal Dias is said to possess considerable influence in the Vatican.

Ever since he became a Cardinal on February 21, 2001, he has been given key assignments by the Holy See. He was a Member of the Council of Cardinals for the Study of the Organisational and Economic Problems of the Holy See in 2001; he was the president delegate of the 10th Ordinary Assembly of the World Synod of Bishops in Vatican in October 2001; he was also a special papal envoy to the celebrations programmed in Tirana, April 25, 2003, for the 10th anniversary of the papal visit to Albania.

From 1973 to 1982, he was a member of the secretariat of the Vatican State, head of the section for the Soviet Union, the Baltic States, Bylorussia, Ukraine, Poland, Bulgaria, China, Vietnam, Laos, Cambodia, South Africa, Namibia, Lesotho, Swaziland, Zimbabwe, Ethiopia, Rwanda, Burundi, Uganda, Zambia, Kenya and Tanzania.

"Cardinal Dias has a strong diplomatic and global background," a senior cleric in the Mumbai archdiocese pointed out.

Kerala-based Cardinal Vithayathil is head of the Syro Malabar Church, one of the most prominent Oriental Churches under the Catholic Church.

He was ordained on June 12, 1954, and did his extensive post-priesthood studies in Rome from 1955 to 1959. He was professor of canon law and other subjects for almost 25 years at the Redemptorist Major Seminary in Bangalore.

Cardinal Vithayathil was provincial superior of his congregation in India and Sri Lanka, 1978 to 1984, national president of the Conference of Religious in India, 1984 to 1985 and apostolic administrator of the Benedictine monastery of Asirvanam, Bangalore, 1990 to 1996.

He was then transferred to the titular See of Antione, appointed apostolic administrator of the Syro Malabar Church in 1997 and promoted to archbishop major of Ernakulam-Angamaly of the Syro-Malabars in 1999.

He was made a Cardinal on February 21, 2001. The Syro Malabar Church accounts for 3.5 million of India's 16 million Catholics.

Cardinal Toppo, the Archbishop of Ranchi, was ordained a priest on May 3, 1969.

He studied at the Regional Major Seminary of St Albert's College in Ranchi. He holds a BA from St Xavier's College, Ranchi, and an MA in history from Ranchi University.

After his studies in theology at the Pontifical Urbaniana College in Rome, he was ordained Bishop of Dumka on June 8, 1978.

He was appointed Archbishop Coadjutor of Ranchi on November 8, 1984 and succeeded to the See of Ranchi on August 7, 1985.

Cardinal Toppo is currently president of the Catholic Bishops Conference of India. In 2002, he received the Jharkhand Ratan Award for distinguished social work done in Jharkhand.