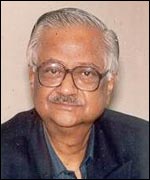 Dr Raja Ramanna, a stalwart of India's nuclear programme who was associated with the country's first nuclear test in 1974, died in Mumbai on Thursday of intestine problem. He was 79 and is survived by his wife, two daughters and a son.

Ramanna had been admitted to Bombay Hospital on Tuesday. His end came at 1930 IST, his personal assistant Ramakrishna said. He was 'feeling all right this morning but breathed his last in the evening'.

The eminent scientist was heading the Bhabha Atomic Research Centre when India carried out its first nuclear test in Pokhran in 1974.

He has served as director-general of the Defence Research and Development Organisation and as scientific adviser to the defence minister.

He was the Union minister of state for defence from January to November 1990. In 1997, he was nominated to the Rajya Sabha.

In recognition of his services, he was appointed director emeritus of the Bangalore-based National Institute of Advanced Studies, which he headed earlier. He was honoured with the Padmashri, Padmabhushan and Padmavibhushan awards.

He had a deep interest in music and even penned a book on the subject: The Structure of Music in Raga and Western Systems

President A P J Abdul Kalam, who was in Aurangabad to attend a function, is expected to head for Mumbai to pay his respects.