It is goodbye to POTA 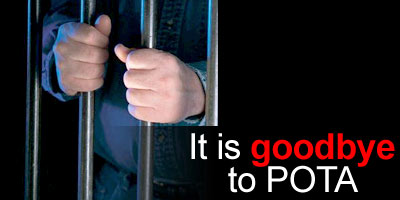 The Prevention of Terrorism Act, which the National Democratic Alliance government insisted was the best remedy to deal with terrorist activities in India, is being repealed by its successor, the United Progressive Alliance.

The abolition of POTA was the Manmohan Singh government's first major policy decision after taking office in May. The decision was approved by the Union Cabinet on Friday, September 17. The only thing that remains now is for the government to promulgate an ordinance repealing the act.

What has POTA achieved?

Now that POTA has all but gone, what are the other laws in India to check terrorism? Deputy Managing Editor George Iype finds out:

When did POTA come into force?

What prompted the Vajpayee government to enact this anti-terror legislation?

The September 11 terrorist attacks on the United States constituted the main reason. Several terrorist attacks, especially in the troubled state of Jammu and Kashmir, and the attempt to storm Parliament in New Delhi quickened the pace of enactment of POTA. The act replaced an earlier anti-terrorism law known as the Terrorist and Disruptive Activities (Prevention) Act, which was allowed to lapse by the P V Narasimha Rao government back in 1995.

What were the salient features of POTA?

It allowed the detention of a suspect for up to 180 days without the filing of charges in court. It also allowed law enforcement agencies to withhold the identities of witnesses and treats a confession made to the police as an admission of guilt. Under regular Indian law, a person can deny such confessions in court, but not under POTA.

How many arrests were made under POTA in the last two years?

According to the Union home ministry, some 800 people have been arrested and jailed under POTA. Some 4,000 people from across country were also booked under the Act.

How many arrests were made under POTA's predecessor, TADA?

From 1984 onwards, some 75,000 people were detained all over India under TADA. Of these, 73,000 cases had to be subsequently withdrawn for lack of evidence.

But, strangely, though TADA was repealed long ago, there are still prisoners languishing in jails in India under this Act. For instance, there are 14 TADA prisoners still in Patna jail, according to Mukundan C Menon, secretary general of the Confederation of Human Rights Organisations.

So even after POTA's repeal, those arrested under this Act will stay in jail?

Probably. After POTA is repealed, the law will not be used to make any new arrests. But those already arrested under POTA will continue to fight their cases under this law and remain in jail.

Home Minister Shivraj Patil has, however, promised that a special review committee will decide the future of all pending POTA cases within a year.

In which state was the maximum number of arrests made under POTA?

No, it is not Jammu and Kashmir, as you may have thought, but Jharkhand that saw the largest number of arrests under POTA. Some 250 people have been jailed under the law in this eastern state.

The state government claims that POTA has been widely used in many parts of Jharkhand to curb the Naxalite menace. But human rights activists say POTA has been misused in Jharkhand against poor, low-caste, tribal people and farmers and villagers who support Naxal groups.

Which was the most famous arrest under POTA?

The most high profile POTA arrest has not been of any terrorist, but of Marumalarchi Dravida Munnetra Kazhagam leader V Gopalasamy aka Vaiko. Tamil Nadu Chief Minister J Jayalalithaa got Vaiko arrested under POTA for making a public speech in support of the Liberation Tigers of Tamil Eelam.

Has the government banned any organisation under POTA?

The Vajpayee government banned 32 organisations under the anti-terrorism legislation.

Will the ban on these organisations be lifted now?

The ban under POTA will go. But the government will enforce a ban on extremist organisations under the provisions of other criminal laws, notably the Unlawful Activities (Prevention) Act, which is to be amended.

Now that POTA is being repealed, how will the government control terrorism?

The Manmohan Singh government is contemplating alternative measures to check terrorism, the details of which have not been decided yet. But cracking down on terror funding, which has emerged as a major security threat, tops the agenda.

Does any law exist now to check such funding?

There is the Foreign Exchange Management Act, said to be India's most stringent law dealing with foreign exchange transactions. But FEMA is saddled with a big drawback. The Act does not grant the Enforcement Directorate powers to arrest and prosecute money launderers. Thus hawala, or illegal foreign exchange transactions, goes on unabated in India.

POTA was the only law dealing explicitly with terror funding in addition to other aspects of terrorism. Officials say that after it is repealed, the government may amend FEMA to make it more stringent. The amended Unlawful Activities (Prevention) Act will also have provisions to check the funding of terrorist groups.

Will the government initiate any other anti-terror law to replace POTA?

It is unlikely that a new anti-terror law will be enacted after the many controversies that POTA and, before it, TADA generated. The new Congress-led government's argument is that India already has a number of stringent laws like the National Security Act and the Unlawful Activities (Prevention) Act to check terrorism.