Why has history forgotten this giant? 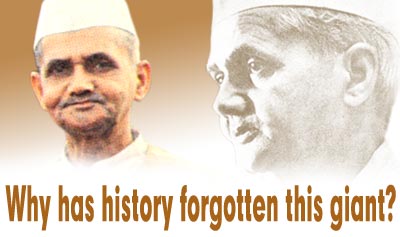 Though his parents Sharada Prasad and Ramdulari Devi were Srivastavas, Shastri dropped his caste identity in his early years. In 1921, inspired by Bal Gangadhar Tilak and Gandhi, he cut short his studies to join India's freedom movement.

Later he joined the Kashi Vidyapeeth and earned the epithet 'Shastri' by obtaining a degree on philosophy.

He won the hearts of Indians when he showed exemplary courage in taking quick decisions as prime minister June 1964 to January 1966) during the India-Pakistan war in 1965. His leadership in war was an answer to that most often asked question at that time: 'After Nehru, who?'

But his untimely death on January 10, 1966 in Tashkent, in suspicious circumstances, deprived him the chance for history to sit in judgement.

In a haphazardly taken decision, the central government has formed a committee to celebrate Shastri's life and work in the year of his centenary.

In an ongoing series rediff.com salutes the 'gentle giant' who led India through the critical years after succeeding Nehru.

Has the nation forgotten Shastri? Is Shastri, who epitomised honesty and sincerity in public life, relevant today?

Anil Shastri, one of the late prime minister's six children and member of the Congress party, recounts memories of his father in a conversation with Senior Editor Sheela Bhatt.

On the Congress treatment of Shastri

I don't think India has forgotten Lal Bahadur Shastri. Whatever he did is remembered even today. I must say since Sonia Gandhi has taken charge Shastriji's portraits are displayed in all the annual sessions of the party.

Many people have observed that there was a conspiracy to underplay Shastri's legacy within the Congress. This serious charge is untrue for the simple reason that due to his untimely death his contribution to the nation was confined to those 18 to 19 months when he was PM.

Nehru ruled the country for 17 years, Indira Gandhi for 16 years and Rajiv Gandhi for 5 years. Obviously the Nehru-Gandhi contribution is unparalleled because nobody got this opportunity. And remember Shastriji considered him as a protégé of Pandit Nehru. He was never outside the sphere of the Nehru ideology which is the Congress ideology.

Our nation is going to celebrate his birth centenary throughout the year. The committee is formed under the chairmanship of Prime Minister Manmohan Singh.

Even in Tashkent, Uzbekistan, celebrations have been organised on a big scale. E Ahmed, minister of state for external affairs, was in Tashkent to participate in the celebrations.

Shastriji who represented a certain value system is more relevant today than before because a majority of us today have no value systems. I feel difficult to contest elections. I feel a little out of place but for my lineage I have survived in politics.

I still miss him although I was just 16 years old when he died. If he would have lived 10 more years he would have done much more for the country.

He was down to earth. A real son of the soil. His grounding was from the grassroots level. He was a practical man too. He strongly believed the laws of the land should be changed because the British formed them to rule over India.

He did make an attempt by constituting the administrative reforms commission and made Morarji Desai its chairman. But after he died the idea was shelved.

The most cherished memory I have is the verses of Guru Nanak, which were displayed on his table. As Nehru kept Robert Frost's lines -- 'Miles to go before I sleep', on his desk, my father kept Nanak's quotes in Gurmukhi.

When translated into English they mean -- 'O Nanak! Be tiny like the grass, for other plants will whither away, but grass will remain ever green.'

When under the PL 480 programme, America was going to send inferior quality of wheat to India, he opposed it. He asked the nation to go hungry once a day than accept poor quality food from US.

Before making this announcement he asked my mother not to cook evening meals. He himself followed what he recommended.

He appeared very modest but was a man of steel. He had the ability to take quick decisions. It was demonstrated on August 31, 1965. On that day he came home for an early dinner. One of his secretaries told him that the three chiefs of the defence services had come to see him. He immediately left for his office next door at 10, Janpath.

The three chiefs visited him to inform him that the Pakistan army had crossed the international border with 100 battle tanks in the Chamb sector of Jammu. They told him that in a short span of time the Pakistan army would cut off Kashmir from the rest of India.

Without losing time he asked for the opening of a new front including Lahore. Retaliate with full force, he said. What I remember is that the historic meeting lasted less than five minutes. Arjan Singh, the then chief of the air force was present. He is the only surviving member from that meeting.

He told them, "Be prepared for war." He called Defence Minister Y B Chavan and informed him of the decision. He responded positively and expressed his support. He didn't wait for international reactions. The next day, newspapers reported that the Indian army was marching towards Lahore. It was a big morale booster for the country.

During those tense days, in his address to the nation from Red Fort on Independence day, he said: "Hathiyaron ka jawab hathiyaron se denge. (Force will be met with force.) Hamara desh rahega to hamara tiranga rahega. (Our flag will survive only if our country does)"

On Shastri and the Nehru-Gandhi family

Pandit Nehru was very found of him. Shastriji was around 15 years younger but he trusted him fully. In 1956, when a train accident killed 144 passengers near Ariyalur in Tamil Nadu, Shastriji resigned. Panditji refused to accept the resignation but he prevailed upon Panditji to accept it.

On the following day in Parliament, Nehru said no one could wish for a better comrade than Lal Bahadur. A man of the highest integrity and devoted to ideas is called Lal Bahadur, said Nehru.

Once he was sent to Kashmir by Nehru to help resolve the theft in the Hazaratbal shrine. Nehru asked him whether he had enough woollens for the trip.

"Are you aware Kashmir must be having snowfall at this time?" asked Nehru.

Shastri showed him the jacket he was wearing and Nehru immediately gave his own mink overcoat. My father was short in stature so he told Nehru the coat was quite long. But Nehru said woollen overcoats were always longer. That no one would know it was a borrowed one.

On his return from Kashmir when father went to him to return the overcoat, Nehru asked him to keep it. The next day newspapers reported: Nehru's Mantle Falls on Shastri.

Shastriji and Indiraji also enjoyed a close relationship. She had the highest personal regard for him. After Nehru's death in 1964, the Congress chose him as a consensus candidate. He did make an attempt to persuade Indira Gandhi to take over as prime minister. He went to see her and asked her to become prime minister.

She put her foot down and said no. "You become PM and I'll totally support you," she said. When he was PM he would drop by at 1, Safdarjung Road (Indira Gandhi's home) without intimation just to chat with her.

Part II: The politician who made no money