'One can place one's trust in Dr Singh' 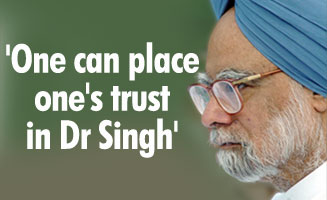 I cannot claim to know Dr Manmohan Singh intimately but we have known each other fairly well for a long time -- as a parliamentarian, as a person, politician and administrator.

He is highly qualified. His varied and rich experience enabled him to occupy prestigious positions in our political set-up as well as outside.

He is one in whom one can place one's trust and faith.

He is a very humble person and one can easily relate to him. Dr Singh and his wife would drive around Delhi in their old Maruti after he became leader of the Opposition.

When I called him to congratulate him on Thursday May 19 after President A P J Abdul Kalam invited him to form the government, Dr Singh recalled that he received his graduation certificate from my father N C Chatterjee, a former member of Parliament and one of the topmost lawyers of the country. He always tells me that he never forgets the speech my father had delivered at the convocation ceremony.

I am very happy that he is occupying the highest position in our political set-up. We (the Left parties) have no quarrel with him.

We in the Communist parties have differences of opinion with the economic policies of the Congress party.

But I am confident that, as a person of tremendous experience, Dr Singh will see to it that there is no tension in the body politic or the administration or the political life of our country.

We appreciated when he categorically stated that the Congress party is totally against the privatisation of profit making public sector undertakings. We agree with his view that reforms should have a human face.

Reforms means change for the better but the National Democratic Alliance government had converted reforms into jargon.

The government should implement policies that would be acceptable to the vast majority of the members of the ruling coalition and those extending support to the government from outside.

Dr Singh has unparalleled political acumen, which he demonstrated in ample measure during his stint as leader of the Opposition in the Rajya Sabha. One cannot but admire the lustre that he brought to the office he held for the last five years. Some of his speeches were highly appreciated.

He constantly protested against the nefarious attempts of the previous government to communalise this country and create divisions amongst the people. He was forthright in his condemnation.

I have never seen any bravado in his speech or haughtiness in his actions. We are very happy with the choice and Sonia Gandhi needs to be complimented for that.

I am sure the country will progress leaps and bounds under his leadership.

Somnath Chatterjee, Communist Party of India-Marxist member of the Lok Sabha and the likely Speaker of the House, spoke to Onkar Singh.