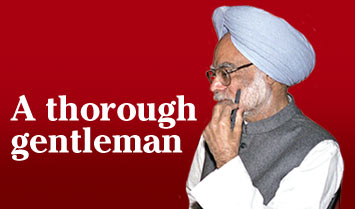 My sister and I met Dr Manmohan Singh when he was governor of the Reserve Bank of India. My father, the late Amal Kumar Das, was his protocol and security officer.

We once attended a celebration where Dr Singh and his wife were invitees. My dad, who was accompanying Dr Singh in his official capacity, was a guest as well.

Dr Singh's demeanour on that day left an indelible impression on my mind.

When we went to fetch them at their bungalow off Peddar Road in Mumbai, we were graciously invited inside. Dr Singh, his wife and daughter Amrit made us feel like welcome guests.

Later, he accompanied us to the event. Not once did he make us teenagers feel out of place. He opened the hotel's doors for us. He even dropped us home.

His humility and greatness were evident. This was not a man who harboured any kind of false ego.

I am proud to have a person of his stature lead our country.

Dr Singh and [President] Dr [A P J Abdul] Kalam are people we can look up to as they lead by example. We, the youth of today, need such icons to inspire us.

We have seen the 'bad guys' win too often. Now, it's the turn of the 'good guys'.

India is indeed shining -- with a finance guru and a nuclear scientist at her helm, how can she go wrong?

Today, I feel good within myself. I feel proud to say I am Indian.

I would like to wish Dr Singh all the very best in his new role. I pray that God grants him and his family everything they need to make his stint as prime minister a successful one.

I feel privileged that Dr Manmohan Singh, our prime minister, was the chief guest at Aligarh Muslim University's convocation ceremony in 2002, during which I was awarded my PhD in biochemistry.

I cannot forget the convocation address he delivered.

I wish him and his government all the best and hope our country will progress more than ever under his able leadership. 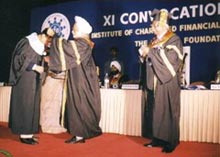 November 1999. The PGDBA & CFA convocation at the Institute of Chartered Financial Analysts of India, Hyderabad. Dr Manmohan Singh was the chief guest.

I still cherish the moment I received a silver medal for my academic performance from Dr Singh and shook hands with him. I had no idea then that he would, some day, become the prime minister of India.

I still have those photographs with me (see alongside) and will always cherish them.

I met Dr Manmohan Singh when he visited the Middle East as India's finance minister. He had just devalued the Indian rupee. With that one stroke, the hawala operator was out of business and the Indian forex reserves climbed.

I remember him as being a very simple man who spoke very well.

The next time I met him was in South Delhi during the 1999 Lok Sabha election. He was contesting from South Delhi [a campaign he lost]. We had a long chat. I voted for him even though I am a BJP supporter.

I am happy to see Dr Manmohan Singh as our prime minister. Everyone is feeling proud to be represented by him. It is India's good fortune that he is at her helm.

I pray to God that he has a long life and leaves a mark on Indian politics. I hope our politicians learn there is no need to be corrupt and play dirty to run great country like India.

HAVE YOU READ?
Saving the taxpayer's money
Dr Singh's autograph
'I have to give something back to society'
Dr Singh: Upright and conservative

Have you met Dr Manmohan Singh? Share your experience with us.