Prime Minister Manmohan Singh on Sunday condemned the terrorist attack on a Border Security Force bus in Kashmir, in which 29 people were killed.

"The persistence of this senseless violence in J&K is yet another indication that terrorism continues to pose a grave threat to our nation's integrity and progress," the PM said in a statement in New Delhi.

"While we continue to seek peaceful resolutions to all outstanding problems, there can be no compromise on our solemn resolve to deal with the menace of terrorism with firm determination", Dr Singh said while presiding over a Cabinet meeting, where a motion condemning the "cowardly act" was adopted.

"My heart goes out in sympathy to the members of the bereaved families. Their loss, which is shared by the entire nation, is truly irreparable," the PM said.

Among those killed in the attack were 17 BSF men and 12 of their family members, including six women and three children. The bus hit an improvised explosive device. 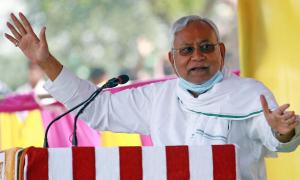