Relations with Israel may be affected 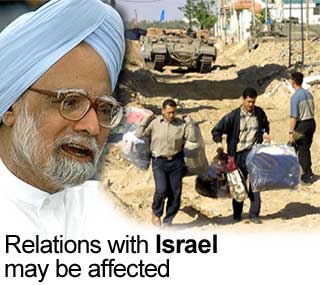 Part I: The new government and national security

Part II: The BJP understands the US better

Part III: How will we deal with our neighbours?

Israel does not figure in the Congress document at all. As already mentioned in Part II of this series, it was under Indira Gandhi in the late 1960s that channels of communication and mutual security assistance with Israel were opened. These were kept sustained by the Morarji Desai government and further strengthened by the Rajiv Gandhi government and the governments that followed. The Narasimha Rao government established full-fledged diplomatic relations with Israel in 1992.

However, all governments, which preceded the BJP-led coalition, kept the relations with Israel in various fields a secret lest public disclosure of them damage India's standing in the Islamic world. The BJP-led government brought these relationships into the open and further expanded them.

It also sought Israeli experise in the use of technical means for countering terrorism. It also encouraged non-governmental contacts with Israel as well as the Jewish community in the rest of the world and, particularly in the US, to identify new areas of co-operation. There was also an open exchange of visits at various levels, the high point of which was Israeli Prime Minister Ariel Sharon's high-profile visit to India last year.

There was strong criticism of the BJP's handling of the relations with Israel from the Congress (I) as well as the Leftist parties and pro-Arab intellectuals in the months before the election. The Congress (I)'s criticism was mainly due to the fact that it felt that the BJP had allowed the importance attached by it to these relations to mute its criticism of Israel for its policy of reprisals against the Palestine Liberation Organisation and downgrade India's traditional support to the Palestine cause.

First, the mutual security and military supply relationship would, most probably, be maintained, but in secret as it was before 1998.

Second, the priority given to counter-terrorism co-operation may be downgraded.

Third, high-level and high-profile exchanges of visits, particularly of personalities perceived by the Congress (I) as controversial, may be reduced, if not stopped.

And four, there would be much stronger vocal support to the Palestine cause and criticism of Israeli's policies and actions against the Palestinians.

The 'Look East' policy started by the Narasimha Rao government to expand and strengthen India's relations with the South-East Asian countries and ASEAN was further developed by the BJP-led coalition. The momentum in this regard would be maintained.

How effective will the Congress (I) be in the implementation of its policies?

There is a big question mark over this. The past Congress (I) governments of Indira Gandhi and Rajiv Gandhi had absolute  majorities and did not have to depend on other parties for their policy formulation and implementation. The Narasimha Rao government did not have that kind of majority, but it managed to survive without any undue dependence on others. In the incoming coalition, the Congress (I) has only a half of the required absolute majority. Its dependence on its electoral allies, particularly the Communists, would be high and possibly crucial.

While policy differences with other coalition partners at the Centre or to the right of the political spectrum would be minor and manageable, those with the Leftists, who have won the largest number of seats since Independence, could prove to be difficult to manage in respect of economic reforms and relations with the US and Israel.

Any slowing down of the economic reforms or reversal of past policies could have an adverse effect on India's relations with the West, particularly the US. The regimes in China and Russia, who were the past mentors of the Indian Leftist parties, have realised the importance of good relations with the US, even while maintaining their vital national interests. Many of our leftists continue to live in the past and have nothing to learn from the present pragmatic regimes of Beijing and Moscow.

A statement issued by the Central Committee of the Communist Party of India-Marxist on May 18, calls for opposition to 'imperialist (Read US) penetration' in society and a foreign policy consistent with India's traditional stance of non-alignment. 'The policy should promote multi-polarity and good relations with our neighbours and promote dialogue with Pakistan.' It adds.

During the election campaign, the Leftists had been calling for a re-look at all the agreements on military-military cooperation with the US signed under the BJP-led coalition.

Will the Leftists revive and persist with these demands? Will the Congress (I) be able to persuade them not to insist on them? What influence will the Leftists exercise on the foreign policy and national security management? It is difficult to answer these questions at present.