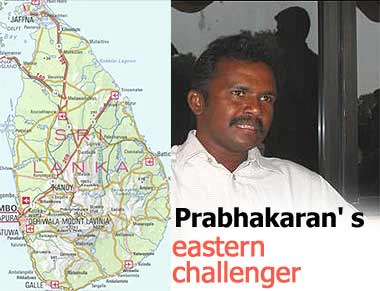 Ever since the ceasefire accord between the government of Sri Lanka and the Liberation Tigers of Tamil Eelam  was signed two years ago, there were persistent reports of unhappiness amongst the Tamils of the east with those of the north.

This unhappiness was mostly over the overtures to the Muslims by the LTTE's northern leadership, which was seen as unjustified, the lack of recognition of the easterners, who had fought and won most of the LTTE's battles against the Sri Lanka army, and over the perceived discriminatory treatment meted out to them in the north.

Did this unhappiness force Vinayagamoorthi Muralitharan, alias Colonel Karuna, who, as special commander, Batticaloa-Amparai, was in overall charge of the LTTE's military operations in the Eastern Province, to act against LTTE supremo Vellupillai Prabhakaran against his will, or did he take advantage of it to defy Prabhakaran and assert his independence?

More importantly, will he succeed in his defiance? Will the fighters of the east carry out his orders or disobey him? If they obey his orders, will there be a military conflict between the north and the east, leading to a resumption of  violence and damage to the peace process? Even if Prabhakaran succeeds in having Karuna eliminated, will he be able to re-assert his control over the east? Will his authority remain as strong as before?

These are very relevant questions, but difficult to answer at present. But it is safe to say  that Karuna's position is not as strong as he thinks, nor is it as weak as Prabhakaran seems to wish it is. Even presuming that the overwhelming majority of Karuna's followers remain loyal to him, which is doubtful since they may not wish to contribute to a weakening of the struggle for Tamil Eelam, the two forces would be evenly matched and the outcome uncertain.

The rift between Prabhakaran and Karuna came to the fore on Saturday, March 6,  when the LTTE released the following statement:

The commanders, divisional heads and cadres under him, unable to acquiesce with this traitorous act, have refused to comply with his orders and met with the national leadership, explaining the ground reality prevailing there. In accordance with this, Karuna has been discharged from the Liberation Tigers organization and relieved of his responsibilities.

It is hereby informed that these officials will assume their positions and functions as the official representatives of our organization.'

Simultaneously, Prabhakaran reportedly ordered that about 500 cadres from the Eastern Province working in Kilinochi whose loyalty to him was suspect should be disarmed and placed under house-arrest. Karuna retaliated by appealing to the fighters from the east deployed in the north to get those under house-arrest released and to help them return to the East.

The press release followed three days of intense speculation about serious differences between Prabhakaran and Karuna.

These speculations were initially denied by Tamilselvan, but subsequently admitted after reports that Karuna had replaced some key Prabhakaran loyalists in the Eastern Province with his own nominees. He then approached the Sri Lankan authorities and the Norwegian monitoring mission for a recognition of the separate role of his set-up in the now-stalled peace process, for physical protection and for ensuring safe passage for the eastern cadres bottled up in the north who want to return to their homes in the east.

These key changes, announced before Karuna was removed, included the appointment of Karikalan as the Batticaloa-Amparai political wing leader in the place of  Kausalyan; the replacement of Ramesh, Karuna's deputy military commander, by Rabat; and of Pirabha, in charge of administration, by Thurai.

Kausalyan, Ramesh and Pirabha fled to Kilinochi and have now been reinstated by Prabhakaran in the LTTE's set-up in the Eastern Province.

But it is unclear whether his orders are being carried out by his subordinates.

On July 31, 2002, 53-year-old Karikalan, a native of the Eastern Province and a close confidante of Prabhakaran for two decades, designated as the special political commissar for Batticaloa and Amparai, was removed from that posting along with two of his close associates, Visu and Thurai,  both also natives of the East, by Prabakaran. They were instead attached to the military wing and transferred to Kilinochi.

While no reasons were given for their unceremonious dismissal and transfer out of the East, well-informed observers said it followed a report by the LTTE's intelligence wing blaming them for provoking riots by Muslims of the province with their irresponsible comments. Karikalan had justified the collection of taxes by LTTE volunteers from the Muslims on the ground that since the Muslims occupied land which originally belonged to the Tamils, they had to pay taxes to the original owners.

Prabhakaran was also angry over a statement made by Karikalan rebuking Rauf Hakeem, leader of the Sri Lankan Muslim Congress -- without, however naming him -- for taking up the problems of the Muslims of the Eastern Province directly with Prabhakaran instead of first discussing them with the LTTE leadership in the Eastern Province.

'Solutions to real problems can be achieved by holding discussions with the regional commanders in areas where such problems really exist. Instead of doing so, making attempts to resolve problems by talking to our hierarchy will not help because solutions about the exact field situation, the ongoing problems and how to resolve them won't be available there. Matters should be resolved through discussing issues in places where they exist. Unity cannot be reached through commandments or insistence,' Karikalan told the Colombo Tamil daily Virakesari.

After dismissing Karikalan and his two associates, Prabhakaran had named  Kausalyan, the LTTE's financial controller for the province, as political chief of Batticaloa-Amparai and Reginald, the then head of administration, as deputy political chief  in addition to his charge as the head of administration. These changes were welcomed by the Muslim community who viewed Karikalan and Karuna as anti-Muslim. However they caused ripples of discontent amongst the local Tamils, many of whom approved the hardline approach towards the Muslims.

Over 100 cadres of the LTTE loyal to Prabhakaran are also reported to have fled to Vanni before the LTTE issued the order sacking Karuna. It is not known how many of them are from the north and how many from the east.At the same time, Karuna was reported to have sought the help of the Sri Lankan army and the Norwegian monitoring mission officials to ensure the protection of nearly 2,000 cadres from the east employed in the north and for their safe return to the east. Among those loyal to Prabhakaran who escaped to Kilinochi were Keerthi and Senadi Kuilanban.

Part II: The seeds of discontent