Killing two pols with one rumour 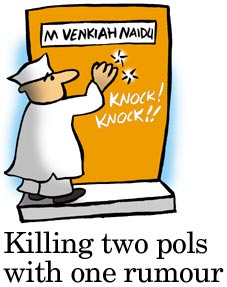 Senior Congress leader Arjun Singh's son Ajay, a party MLA from Churhat in Madhya Pradesh, tagged along with a common friend of BJP Chief M Venkaiah Naidu when he went to the latter's Prithviraj Road bungalow. As Naidu was in a meeting with senior party leaders, including L K Advani, the two men were asked to wait in the visitors' room.

It was at this stage that someone among the waiting horde of newspersons identified Ajay Singh. Within minutes the rumour spread that Arjun Singh's son too was about to dump his party to jump on the seemingly winning BJP bandwagon. Of course, there was no truth in these rumours but Arjun Singh's detractors in the Congress party used it to put him down a notch or two by sowing the seeds of suspicion about his loyalty to the party.

Unfazed, the old war horse, a senior member of the Congress Working Committee, refuses to kowtow to the new-fangled Congressmen and women who have now got the ears of party boss Sonia Gandhi!

Never mind economic reforms and liberalisation. When it comes to safeguarding their vote banks politicians can be relied upon to ride roughshod over well-considered principles and policies. The manner in which the Vajpayee government has handled steel prices in recent days is an eyeopener.

When the matter first came up before the Cabinet Finance Minister Jaswant Singh murmured a word or two against the proposed ad hoc reduction in excise duty on steel but his voice was drowned out by the chorus from his colleagues who pleaded the cause of the user industries.

As one of them put it, the interests of seven major steel producers in the country can well be sacrificed for the sake of tens of thousands of steel users who employed lakhs of workers (read voters). That clinched the issue for the reduction in excise duty and other measures which followed to reduce the end price of steel.

At the same Cabinet meeting a couple of ministers also expressed the apprehension that the steel producers might not pass on the benefit of the excise duty cut to consumers. The fears of the ministers were not misplaced. When in spite of the reduction in excise duty, and the disincentive against exports which was supposed to make more steel available for domestic market, steel manufacturers did not pass on the benefit to the consumers, a meeting was convened post haste at which ministers read the riot act to the steel makers.

For sure. the steel makers fell in line and issued huge advertisements in newspapers to show their compliance of the ministerial edict.

Another example of governmental intervention to control market forces, reminiscent of the Emergency when lowly officials dictated the prices of manufactured goods to multinationals and other producers, was Divestment Minister Arun Shourie's public contretemps over the subscription to the shares of high-ticket public undertakings.

Keen to realize the budgeted amount from divestment, Shourie's questionable route to mop up funds defied market forces and revealed the arbitrary steak in his mental make-up.

Market forces had to bend before Shourie, never mind the damage it did to a principled economic regime.

The case of the wrong Oza

Boys and girls hardly out of their teens who cover national politics for various television news channels are more often than not innocent of all things political. Brassy and bold, they thrust the microphone in the face of senior ministers and others, assuming that it was their birthright to pose rude questions without having a basic grounding either in manners or political affairs.

Some years ago, a young thing confronted the then home minister of the country, Indrajit Gupta, in Parliament House and flung a question at him in her typically aggressive manner. Gupta answered the question as politely as he could only to be asked by the television reporter, 'By the way, what is your name?'

Something similar happened at the BJP's Ashoka Road headquarters a few days ago when three retired diplomats, including the former Indian ambassador in Sweden, B M Oza, joined the party. Oza had hit the headlines upon his retirement a couple of years ago when in his book he had claimed that the late Rajiv Gandhi was deeply involved in the Bofors cover-up.

Before the mandatory press conference where party leaders display the new recruits as the latest trophies won by them, a senior BJP leader warned Oza that he should be prepared to answer a volley of questions about his claim that Rajiv was a party to the Bofors cover-up.

Pronto came the reply, "Do not worry. They think I am the retired director general of police, Bihar, D P Ojha. In fact, when I was coming into the BJP office a girl from a television channel asked me, 'Mr Ojha, what do you have to say about the worsening law and order situation in Bihar and are you going to contest the election from Bihar?'"

The owners of the PR agency that has bagged a contract to manage the image of the Congress campaign in the forthcoming parliamentary poll are feeling mighty relieved. The reason for their happiness is that the cheque given by the party as part payment for their services has finally been honoured. Though not every Congress leader is happy with their services -- asking one party leader to shave his beard; ordering another to take voice lessons in order not to sound nasal; imploring yet another to improve his sartorial sense while doing duty for the party on television.

Besides, the agency has riled even Congress-friendly scribes by its behaviour. It seems some young girls employed by the agency phoned senior scribes asking them to pose such and such questions to BJP leaders at their daily press conference. The same PR agency deployed its teenyboppers to ask newsmen to put convenient questions to Congress spokespersons so that the latter could come up with prepared replies.

Incidentally, at least a couple of questions put to party chief Sonia Gandhi at her so-called first informal interaction with the media last month were duly rehashed by her media managers and the scribes who were hand-picked to ask them. Mrs Gandhi's response that hers wasn't the only political dynasty in the country was duly rehashed before hand.

Heard in the BJP office: Arun Shourie as a newsman used to network with politicians, but now that he is a politician, he networks with journalists.