Sign in  |  Create a Rediffmail account
Rediff.com  » News » 'There is always a limit to how much any country can take' 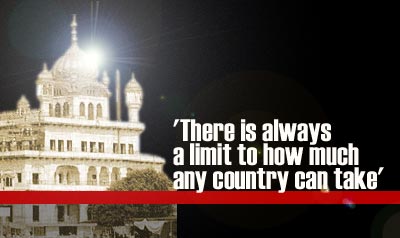 Lieutenant General (retired) Kuldip Singh Brar commanded Operation Bluestar 20 years ago, when the Indian Army entered the Golden Temple to remove the terrorists who had turned the Sikhs' holiest shrine into a private bunker. It was one of the Indian Army's most difficult operations, and undoubtedly the most controversial.

In the second part of a four-part interview with Deputy Managing Editor Amberish K Diwanji, General Brar looks back at the compulsions that forced him to send his men into the Temple:

Part I: 'Pakistan would have recognised Khalistan and crossed the borders'

Were you given a timeframe within which to act?

The fastest possible. When I met my CO [commanding officer] Lieutenant General K Sundarji [then General Officer Commanding, Western Command; he later became Chief of Army Staff] at Chandimandir [in Chandigarh], he told me he would fly down in 48 hours to hear my first briefing. Time was at a premium.

So we moved all night and got our forces into Amritsar and then the Temple.

What about a siege to flush out the militants?

A siege is easily spoken of. A siege is only effective when you are able to make the people under siege unable to continue to stay under siege. That means they have no water, no food, no electricity, no ammunition and are forced to surrender or to capitulate.

But, in the Golden Temple, there is no shortage of water. There are any number of wells; besides there is the Sarovar [the Holy Lake on the premises of the Temple]. There are a number of generators. There is no shortage of food -- every day, thousands of devotees flock to the Temple bringing with them food and provisions, so there is enough food to feed a few hundreds of thousands of people for over a month [food is served free of cost to the devotees every day in the Golden Temple; this food is made from offerings by the devotees], and here we are talking of forcing the hand of a few thousands

The other problem of a siege was that, once laid, word would have spread to the hinterland within 24 hours. Every villager in Punjab would be told the Golden Temple was under siege. In those days, every rumour or fact was exaggerated; such messages are sent out emotionally, thus surcharging the atmosphere. People would have picked up their swords or lances and hundreds of thousands would have converged on Amritsar and the Golden Temple and besieged the army that was besieging the Temple! We can't fire at these people, and we can't surrender, so what are we to do? We didn't want such a situation to arise.

After asking the militants to surrender [on June 5], we waited and waited. It soon became 8 o'clock, then 9 o'clock and was nearing 10 o'clock. We were worried. We had to finish the operation before dawn [around 5.30 am] for fear of mobs amassing around the Temple. The news would spread fast that we hadn't cleared out the militants, then we would be under siege. People must understand these things.

It is very easy to say to we could have laid siege, we could have postponed it for a day or two, or carried out the operation without the loss of life. It is only we, who were there at that time, who know what our limitations and needs were. Our soldiers went into what you would call a death trap. They had no cover, they were out in the open [when moving from the entrances to the various rooms and sections where the militants were hiding]; in contrast, the militants had barricaded every window and were heavily armed

So ultimately you had to finish off the operation in 48 hours, because you feared Pakistan coming in?

That was the biggest fear. It had to be a surgical operation and one that caused the minimum damage with least loss of blood but it had to be as quick as possible because once word got around, there would have been a flood of people like the Brahmaputra. When the Brahmaputra floods, there is nothing you can do. No amount of sandbags can stop the flood.

What about the innocent pilgrims inside?

We were to go in at 7 pm [on June 5]. Since afternoon, we used the public address system to keep asking those who were inside to surrender. We told them we don't want to come in, we pointed out that there were pilgrims inside, there were women and children inside, and we told the militants that if they want to fight it out, do so but for God's sake to at least send the pilgrims, the old, the young, out safely. But until 7 pm, nothing happened.

I asked the police if they could send emissaries inside to help get the innocent people out, but the police said that anyone sent inside would not come out again. They said the militants were no doubt keeping the pilgrims as a sort of trump card, believing their presence would stop the army from coming in. Eventually, about 100 sick and old people were let out, but not the rest. They told us the others were not being allowed to come out.

I feel sorry for the innocent people who died in the crossfire.

In the fight, you were dealing with a former superior, Major General [retired] Shahbeg Singh [a highly decorated army officer who, after being dismissed from service for financial irregularities, became a close accomplice of Jarnail Singh Bhindranwale].

Was he a formidable enemy?

He was a very seasoned soldier who won the Mahavir Chakra [India's second highest bravery award in war] in 1971, who had to leave the army for whatever reason. He was a highly emotional person and had joined with Bhindranwale. Perhaps he believed that with the pilgrims inside, the Indian Army would not come in but he never realised there is always a limit to how much any country can take.

How difficult was the operation?

It was in the middle of the night. One cannot see and one is out in the open and under fire from the militants holed up behind barricades. Plus I was constantly screaming at the men inside that come what may, they were not to fire in the direction of the Harmindar Sahib [the sanctum sanctorum where the Sikh holy book, the Guru Granth Sahib, is kept during the day] and that even if there was fire from that side they were not to return fire. Later, there were a couple of bullet holes in the Harmindar Sahib, which could have been the militants' fire or odd stray fire from the soldiers. Otherwise there was no damage to the Harmindar Sahib.

The members of the SGPC [the Shiromani Gurdwara Parbandhak Committee which has managerial control of the Golden Temple and other gurdwaras in India] were living elsewhere in the Temple. They had long lost control of the situation and had no say in what was happening. The writ of Bhindrawale ran not just in the Golden Temple or in Amritsar but throughout Punjab.

Why were the tanks brought in?

Tanks were brought in late to illuminate the Akal Takht, so that the soldiers could see where they were going and to momentarily blind the militants in the glare of the lights. Those who have seen these huge halogen lights know these lights fuse in 20, 30 seconds, so the tanks had to keep going in and coming out. It was not an easy task at all.

Next: 'You are not acting against any religion but against a section of misguided people'

ALSO SEE
Part I: 'Pakistan would have recognised Khalistan and crossed the borders'

Gen Brar's lack of security in London needs to be probed