'Our religion is imbued with colour' 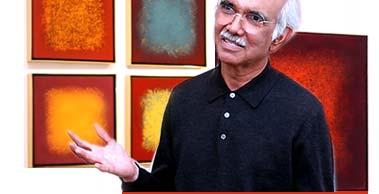 Born in Gujarat in 1934, Natvar Bhavsar was 28 when he arrived in the United States to study for a Master of Fine Arts degree at the University of Pennsylvania. On receiving his degree in 1965, Bhavsar moved to New York City where he became a witness to, and a participant in, the great cultural flowering of the time  in dance, music, and painting.

For three decades he has lived in Soho and watched the neighbourhood become a symbol of New York's celebrated art world. In some ways his story mirrors the story of the neighbourhood. From his first show there in the late 1960s to his latest exhibition of small pictures, Bhavsar's work has embodied some of the vast currents that transformed Abstract Expressionism into the pre-eminent movement of the age.

In person he is an extremely gracious interviewee. He spoke for more than three hours to Jeet Thayil on a day when a wrenched back made it difficult for him to sit for any length of time without discomfort. This interview was conducted partly in the Sundaram Tagore gallery, and partly at Bhavsar's home-studio next door.

How did you hurt your back?

The work that I do is physically very strenuous. I have always said it is back-breaking. You have to stretch into unusual positions for long periods at a time, sometimes for six to seven hours. You have to control minute elements in the work without moving.

What are you working on?

Minute works, so minute in terms of the transformation of color that it is like laying down particles of sand one by one. My working life is discipline and excitement together. It is a kind of fervent dancing, in the same way a dancer manipulates his or her whole body. 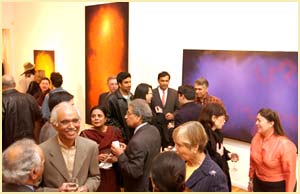 The work in your current exhibition is smaller. Why the shift from the monumental size of your earlier work, huge paintings that were sometimes 13 x 23 feet?

I began to feel I could create the same effect and impact with a smaller painting. When you look carefully at the [smaller] paintings you receive the same physical experience as you would from the larger paintings. Even if you have to look at them with a magnifying glass.

What is the source of the colour in your work?

I believe colour is based on physical elements. It has a real physical entity and an impact on our psyches. I brought colour with me from India. Our religion is imbued with colour; it is a part of our daily lives. In America, colour does not have the same significance. Especially in the cities, life is almost devoid of colour. I believe this is why museums in New York City have more attendance than museums in, say, California. People need to go to museums and events here that saturate their eyes with colour.

The words 'outer space' often come up in discussions of your work, is it outer or inner space that you explore?

Inner space. When I paint I am in a deeply meditative state. The viewer can also achieve a state of meditation.

You have two sons, have they also chosen careers in the arts?

Ajay and Rajeev are twins. They are not artists though they have a great deal of expressive ability in terms of seeing art, and have been exposed to contemporary art throughout their lives. Rajeev has applied to study law. He wrote about environmental law as a student and wants to study it. Ajay has not settled on one subject, he is taking courses in philosophy and psychology. They have the same birthday as Shakespeare, April 23, when they will turn 23.

What do you and your wife Janet do for fun?

We love to travel. Music and dance are as exciting as painting for me. Our life in New York has been rather exceptional, there are so many people we have come to know, so much celebration in the past. Now, fun for me comes very largely in the studio through involvement in my art, and through meeting people and exchanging personalities and thoughts. But joy lies in traveling and seeing art.

Which are the places you return to?

Ajanta and Ellora. I've been there six times, Janet five times, the children four times. We have traveled a lot in India -- I fell in love with Kerala and wanted to buy a place there -- and Europe, in Brittany, Spain, England. We have traveled for 20 days at a stretch, driving through Europe enjoying great art, culture and food.

Coming from India, I feel Europe is more appropriate -- the satisfaction you get from enjoying local life in parts of Italy. We are not connected to the earth in America but to commerce and urban life, which is sad: there are extraordinary landscapes here too.

Why did you first leave India, considering how much Indianness you carry with you still?

My father passed away when I was 19. I became the fulltime breadwinner of the family. Also, it was a quest for knowing.

Looking back on three decades of work as an artist which period of time jumps out at you now?

The sixties. The word to describe it is 'renaissance' -- it was the beginning of the American period of human culture. It was a most enlightened time, expanding at all levels. The period brought in extraordinary people who were filled with joy. The thing I remember is how many faces were smiling. It was a time that offered an experiences of culture that is not available to young people today.

Who are the personalities that you remember from the time? 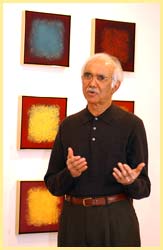 [Mark] Rothko, [Barnett] Newman, [Robert] Motherwell all came to my parties in 1965, where I served cheap wine. I used to drive Janet's little Volkswagen and Newman wanted to go for a drive. There was a sense of celebration.

So many of the artists you knew are now gone, their careers cut short by alcoholism, suicide, and chaotic personal lives. How did you manage to remain unscathed?

What kind of a man was Rothko?

He was supposed to come to my show the week he committed suicide. I went to visit him and the doctor had told him not to drink or smoke.

He would go out of the room to drink vodka. He asked me to get him a pack of cigarettes. I did it.

What made you and so many important American artists choose New York?

New York is a truly global center where ideas and people come together without apprehension. It is not an American city as much as an international one. In this century New York is the place Paris used to be.

Did you expect the various honors that have come your way?

I feel I have been lucky to receive so many gifts. I do not believe in possessions but in these unexpected gifts. The world offers you so many possibilities, you become a participant in its celebration.

What is a personal credo that you live by?

I believe everything happens at the right time, for a reason, you just have to make sure your antennae are up and responsive. That is my faith. If you are fired and you would not have taken the step of leaving your job  somebody has done you a great favor.

What do you read?

At one time I was a voracious reader. My father gave me the keys to a library he built for the community in Gujarat. Now I am not able to read as much.

I no longer read novels or see movies.

If I read it is something to do with knowledge.

What was the last book that made an impression on you?

Albert Camus' autobiographical posthumous book The First Man. And before that Bachelard's The Poetics of Space, in which he psychoanalyses all things -- a pebble, or a window, or sand, or a wave.

What does it mean to be an artist?

My impulses tell me one thing, very assuredly, and I look for confirmation. When you find it, that is not belief but a drop that adds to the ocean of knowledge.