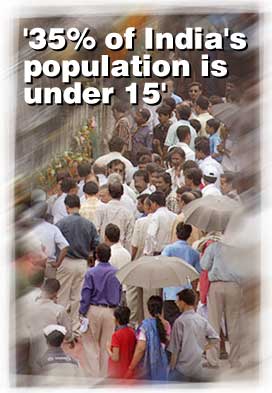 Tim Dyson does not like the term 'population control.'

It is more appropriate to call it India's family planning programme, says the Professor of Population Studies at the Development Studies Institute at the London School of Economics.

The author of four books on India's population, Professor Dyson believes although India will be the most populous country by the middle of the century, the country's family planning programme has not been a failure.

There have been successes and failures, and consequently the population will level out some time during the second half of the present century -- perhaps when it is around 1.6 billion.

In an emailed interview with Senior Associate Editor Archana Masih, he elaborated on the findings in his latest book Twenty-first Century India: Population, Economy, Human Development, and the Environment.

Co-author with Robert Cassen -- whose interview we will publish next week -- and Leela Visaria, Professor Dyson says 35 percent of Indians are below the age of 15, rural to urban migration is the second reason why the population of India's urban areas is growing, not the first and that it is still not 'too late' for India.

What triggered your interest in population studies in India? When did you first make a visit to India for research in demography?

My interest was triggered by working as a research assistant for Robert Cassen back in the mid-1970s. My first visit was in the late 1970s.

How many books have you written on India's population and demography?

I have been involved in four books dealing with India's population. They are as follows:

How would you compare the rise in India's population with China?

You say India will overtake China as the most populous country by the middle of this century, does this mean India's population control programme has been a failure?

No, it does not mean that. I do not like use of the term 'failure' -- which is too sweeping. Also, I do not think it is right to talk of 'India's population control programme'; it is better, and more appropriate, to talk about its family planning programme.

The family planning programme has had some success  certainly, it has helped to reduce India's birth rate and bring the possibility of family planning into the lives of many, many people.

However, the success could have been significantly greater -- perhaps especially in the big states of northern India -- where many women (and men) still do not have the means to limit their fertility, even should they wish to do so.

Having children should be a matter of choice rather than a matter of chance; and, unfortunately, many people in the big northern states still do not have real choice in the matter. Progress could have been faster in this respect.

Are there any measures China is taking successfully that India isn't?

China has been somewhat better in giving its population a range of contraceptive methods from which to choose. The programme in India has sometimes been rather too focused on providing female sterilization.

Your research reveals that India's population will be 1.4 billion by 2026, what implications would this have on the country and its resources?

It will have very considerable implications. As we say in our recent book: in the future India will benefit from slower population growth, and, therefore, there is an urgent need for higher quality services in reproductive health and family planning, together with a host of supporting measures.

Since the large, poor states of north India are where levels of fertility are highest and, women are most disadvantaged, and reproductive health services are still weak, it is in these states that improved services are most needed.

By when will India's population stabilise? What would be the reasons for it? To what measures would this stability be attributed to?

The population will almost certainly level-out some time during the second half of the present century -- perhaps when it is around 1.6 billion. The reason for the stabilization will be that by then the birth rate will have fallen to the level of the death rate. After the population has stopped growing, it may well be that India's population will start to decline in size, since levels of fertility per woman may be below the replacement level (of roughly two births per woman) then.

The research also reveals that in the next 25 years more than half of India's demographic growth will be in the states of Uttar Pradesh, Bihar, Madhya Pradesh and Rajasthan -- what are the reasons for this? Is it poverty and illiteracy or are their other factors as well?

It is partly poverty and illiteracy. However, I think it also reflects the fact that UP and Bihar, in particular, represent the Gangetic core of the country. These very big populations are far inland, and it has taken more time for the progressive message that is family planning to really reach into these large, agricultural, predominantly rural populations.

There is the success of the South Indian states in controlling population -- apart from being an educated people what has the South done that the North couldn't?

Work by various Indian scholars has shown that fertility reduction began in coastal areas of south India and then proceeded to spread inland. This was an advantage that the south had compared to much of the north. The south has generally done better in providing people with family planning services i.e. access to safe, affordable and reliable methods of contraception.

At the present moment India has a large young population which is projected to continue till 2025, after which the majority of the populous will get older -- what are the reasons for this?

The reasons why populations age is fertility decline. Many people wrongly believe that population aging is due to the rise in life expectation. But that view is mistaken. Population aging occurs due to falling birth rates.

What is the likely scenario when a country is largely dominated by an aging population?

This is a difficult question to answer. It depends partly upon how old the population becomes and how healthy the people then are. What one can say is that these problems (i e of population aging) are still quite a long way in the future for most of India. Some people argue that population aging tends to slow economic growth, but I see no reason why this should necessarily be the case. Older people have as much to contribute as do younger people, I believe.

With the constant influx from villages to urban centres, what further implications will this have for the country's already bursting cities and metropolises? How grim is this situation and in the given circumstances, how should it be tackled?

The main reason why India's towns and cities are growing is because of natural increase in the urban areas themselves (i e the excess of urban births over urban deaths). To put the matter differently: rural to urban migration is the second reason why the population of India's urban areas are growing, it is not the first.

There is already a huge gulf between the rich and poor. How will a further rise in population affect this? There is a view that the next biggest social problem before Indians would be the battle between the haves and the have nots. How real and grave is this problem?

So far as population growth is concerned, is it too late for India now?

No, it is not 'too late.' Our new book on India's future is not pessimistic in seeing insuperable difficulties lying ahead. However, it is clear that the country will benefit from slower population growth.