Rao could stick to his guns 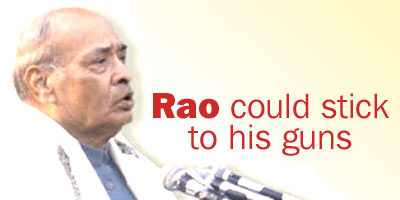 rediff.com begins a new series where T P Sreenivasan, one of India's most distinguished diplomats, recounts his encounters with some of this planet's most interesting people.

This week: he remembers his association with P V Narasimha Rao, the late Indian prime minister who passed away on December 23, 2004.

I happened to be with the New York cardiologist Viswanathan Tallury on the day Rajiv Gandhi was assassinated. The news just came that Sonia Gandhi had declined the offer of prime ministership. I told Tallury that P V Narasimha Rao might be the next prime minister of India.

'Tell him he should not be prime minister. He will not last for three days. I know his heart. It cannot take the strain,' said Tallury, genuinely concerned, having been at Rao's bedside when he had a bypass surgery in Houston. Rao's heart defied medical science to beat for another thirteen years out of which it took every conceivable strain, not only the cares of state, but also scandals and court cases.

Power, in Rao's case, was indeed the energiser.

Rao dominated a great part of my official career, beginning with New York through Rangoon, Suva, New Delhi, New York again and Nairobi. I was with him at several bilateral and multilateral meetings in far off places, not to speak of the innumerable meetings at the prime minster's residence.

I recall his first visit to New York when he was new to external affairs and to the central government itself. His erudition and familiarity with world affairs was evident even then, but it was reported that he had expected to be assigned an economic ministry rather than external affairs and that he hesitated to ask Prime Minister Indira Gandhi for a change for fear that he might be suspected of seeking privileges and perks. He was cautious and reticent during his first visit to the United Nations, but when he came a second time in six months, he had grown fully into the job and appeared to enjoy the international scene.

My only encounter with Chandraswami took place during one of Rao's early visits to New York. Rao sent me down to the UN Plaza hotel lobby to receive a 'holy man.' I found a smart young man downstairs and the holy signs about him were only his beard and Indian clothes. I accompanied him to Rao's room and was surprised at the deference with which Rao greeted a younger man, virtually prostrating before him. I left them with the impression that the minister was with his guru.

Rao's much admired analytical mind appeared to be a handicap in his conversations with his foreign counterparts. Much is said in diplomatic conversations that can be called 'mantras', which cannot be analysed beyond a point. Moreover, he tended to be the devil's advocate quite often and argued the contrary point with his interlocutors, giving them the impression that he was not on their side. When the ASEAN countries were pitted against Vietnam, he appeared to argue the ASEAN case to the Vietnamese and the Vietnamese case to ASEAN.

In diplomatic conversations, it may not always be productive to rationalise issues as the purpose of the conversation is to seek support for a point of view. In internal discussions, he was brilliant as he weighed pros and cons very well and brought out points his officials had not thought of. There was no unquestioning acceptance of briefs and speeches.

Rao had no time for small talk or social courtesies, particularly with those who worked with him. I remember walking into his hotel room in Managua, where we had assembled from different places, some from New Delhi and some from New York. He started the meeting as though we were all living in Managua together. Not even an enquiry as to how everybody was, came from him. I was supposed to join him in Burkina Fasso, from where he issued the famous J&K statement, but I was seriously hurt in an armed attack in Nairobi and could not go.

I believe he was very concerned and asked the foreign secretary to extend all help, but did not care to make a call, which would have made a big difference to me. Someone like Inder Gujral would have gone out of his way to make such gestures even if he did not know the affected colleague personally.

Narasimha Rao: Our finest PM ever?

Indecisiveness was part of Rao's make up, but it was also his instrument in dealing with people and issues. He could stick to his guns and not change his position. I was called in when he was the prime minister just before I was to leave for Bali to lead the official delegation to a ministerial meeting of the Nonaligned Movement. The issue was Burma's effort to get back into the movement, from which it had walked out in Havana in 1979. Rao told me categorically that we should not allow Burma to return as long as it was under a military dictatorship.

Many other countries, including ASEAN were willing to let Burma in for political reasons and we were in the danger of being isolated. My argument that there were many dictators in the movement and that as a neighbour, India had to deal with the dictators in Rangoon did not impress him. He would not relent and I made sure that Indonesia declared lack of consensus without our having to expose our position.

When I was 'invited to leave' Fiji on account of our opposition to discrimination against Fiji Indians in 1989, Rao was still external affairs minister, but he let Natwar Singh deal with the matter. But he found himself unemployed soon enough and he invited me to his quiet home, together with some former foreign secretaries and others for a full discussion on Fiji. He asked many questions and discussed possible solutions and I left for New York the next day with the impression that he was a lonely man. He told me that his books were already shipped to Hyderabad and he would also follow. By the time I returned from New York after a couple of weeks, Rao was prime minister.

I met him last when I spent some time with him at the Washington National Airport during his transits to Boston and back in 1999. He looked tired, but healthy and he was in a talkative mood. He graciously autographed my copy of The Insider for me. He asked me about the US reaction to the nuclear tests. I did not know at that time that he wanted to carry his nuclear secrets to the grave and asked him whether it was true that he had abandoned his plans for testing at the last minute at the instance of Bill Clinton. He categorically denied that, but went on to say that testing was not necessary at all.

I was taken aback by such an assertion and asked him whether he had not kept everything ready for a test in 1995. He again said that after his meeting with Clinton in May 1994, he did not think that testing was necessary as the US had, for the first time, agreed to pursue nuclear disarmament.

I told him that though there was something to that effect in the joint statement, the US delegation in New York had subsequently refused to incorporate any such formulation in a resolution in the First Committee. He smiled and changed the subject. I looked up Raj Chengappa's Weapons of Peace, where Rao is quoted as saying to Frank Wisner, 'Tell your President, I keep my word.'

Perhaps such a word was given in 1994 and not in 1995 in a phone call, as it is generally believed. Did Rao reveal one of his nuclear secrets in that conversation? I wonder.