More than 1,800 people were feared killed and hundreds more went missing when tsunamis triggered by a massive earthquake -- the biggest in four decades at 8.9 on the Richter scale, according to the US Geological Survey's National Earthquake Information Centre -- near the Indonesian islands of Sumatra slammed into the southern peninsular coast of India on Sunday morning.

Note: The toll is likely to change as the situation develops.

At least 1,500 died in Tamil Nadu alone as the waves swept through the coastal areas, bringing in their wake death and destruction.

In Nagapattinam district, around 700 people died, followed by Kanyakumari (250) and Cuddalore (200). 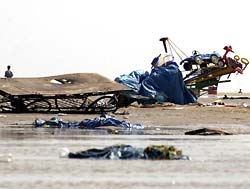 Around 125 perished in the state capital of Chennai. Morning walkers on Marina Beach and residents in the Foreshore Estate slums almost abutting the sea got a rude shock when waves leaping up to 30-40 ft crossed the beach and slammed into the houses nearby, catching people unawares. Most of the victims were women and children who could not get out of the way.

The second unit of the Madras Atomic Power Station at Kalpakkam was shut down after water entered the plant.

About 500 tourists were stranded at the Vivekananda Rock Memorial in Kanyakumari following the tremors. Helicopters from nearby Thiruvananthapuram were pressed into service to rescue them.

In Pondicherry, at least 102 deaths were reported.

At least 86 people were killed and hundreds injured in Kerala's southern districts. Kollam district recorded the most number of deaths (67) followed by Alappuzha (16).

Hundreds of people were injured as seawaters entered houses and fishing hamlets.

Andhra Pradesh reported 52 deaths -- Home Minister Shivraj Patil put the figure at somewhere close to 200 -- mostly in Guntur, Prakasam and Krishna districts. The state government announced a relief of Rs 100,000 each to the next of kin of dead.

The waves also hit the Andaman and Nicobar Islands, whose Car Nicobar Islands are just 115 nautical miles from Sumatra. Twenty people -- including 10 at the Indian Air Force base -- died.

Communication links were completely snapped in the islands.

One person lost his life in West Bengal.

Shocked over the scale of the disaster, Prime Minister Manmohan Singh assured the affected states and Union territories of all possible assistance.

The Centre's Crisis Management Group met and drew up an emergency plan to carry out relief and rescue operations.

The army, air force and navy launched massive rescue and relief operations, pressing helicopters, transport aircrafts and ships along the eastern coastline and in island territories to search for the dead and trapped.

This is the first time India has been hit by tsunamis, which are triggered by seismic disturbances -- coastal earthquakes, volcanic eruptions or undersea landslides -- that jolt the ocean floor. The result is a deep wave that stretches from the sea's surface to the floor and travels horizontally at speeds of up to 800 km/hr and rises between 50 and 100 ft.

The earthquake and the resultant waves did not spare Sri Lanka, Indonesia, Thailand, Malaysia and Maldives, too.

Over 2,400 people were killed when tsunamis pounded more than half of Sri Lanka's coastlines.

There were 1,032 fatalities in Batticaloa district alone, according to reports. In Trincomalee, there were reports of 320 deaths. The Galle tourist resort reported around 200 deaths.

Around 200 prisoners escaped when waves swept away a prison in Matara, in southern Sri Lanka.

Sri Lankan officials imposed a curfew as night fell, and tourists were being evacuated from the eastern coast to the capital, Colombo.

India agreed and sent two naval ships to Galle, in the south, and Trincomalee. Indian aircraft will bring in relief supplies to the country on Monday.

The quake and the waves that followed killed over 1,800 people in Indonesia. Many of the fatalities were in the troubled Aceh region.

In southern Thailand, some 400 were killed on the island of Phi Phi. The tourist resort of Phuket witnessed 48 deaths.

A state of emergency was sounded in Thailand and Sri Lanka.