Bhopal tragedy: The story so far 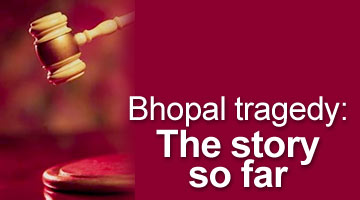 Union Carbide Corporation has washed its hands off the case, and the Government of India is not pushing too hard.

So where does that leave the victims?

All they have got to show for their endless padyatras, dharnas and hunger strikes is money from the American multinational that is not enough to even cover their medical bills.

rediff.com presents a ready reckoner to the Bhopal victims' quest for justice:

December 7, 1984: Union Carbide Chairman Warren Anderson, the prime accused, and eight others are arrested. Anderson is released on bail of Rs 25,000.

Summons are served on Anderson and Union Carbide.

February 14-15, 1989: While the issue of interim compensation is being heard before the Supreme Court, Union Carbide and the Indian government strike a deal, under which the company pays a compensation of $470 million. In return, criminal charges are withdrawn against the company.

October 3, 1991: The Supreme Court revokes criminal immunity granted to Union Carbide and all other accused in response to the review and writ petitions.

The court also orders the government to construct a 500-bed hospital for the victims. Union Carbide and UCIL are asked to pay money to construct the hospital and run it for eight years.

November 11, 1991: Criminal cases against all the accused are revived in the Bhopal court.

January 1, 1992: Proclamation for Anderson's appearance is published in The Washington Post.

February 21, 1992: A chief judicial magistrate's proclamation is published in The Washington Post declaring Union Carbide an absconder and ordering it to appear before court on March 27, 1992.

April 30, 1992: The chief judicial magistrate attaches the shares and properties of UCIL held by Union Carbide.

May 22, 1992: The chief judicial magistrate commits the case to trial after separating three of the 12 accused who are proclaimed as absconders -- Anderson, Union Carbide and UCE.

October 1992: The Permanent People's Tribunal on Industrial Hazards and Human Rights holds its session in Bhopal and recommends the setting up of an International Medical Commission on Bhopal.

January 7 to 25, 1994: The IMCB is formed as 14 medical specialists from 11 countries come together to deliberate on the long-term medical care of the victims.

February 2001: Union Carbide merges with Dow Chemicals and Dow claims it is not responsible for a factory it didn't operate.

May 24, 2002: The CBI requests the Bhopal magistrate to dilute the charges against Anderson, from 'culpable homicide' to 'criminal negligence.'

August 28, 2002: The magistrate reaffirms the charges and demands Anderson's extradition.

August 29, 2002: Greenpeace visits Anderson at his home and hands him an arrest warrant.

March 25, 2003: Three survivors' groups hold a press conference in Bhopal and announce that they will appeal the decision.

May-June 2003: The government conveys its request for Anderson's extradition to the US.

October 18, 2003: US Congressmen file an amicus brief with the Second Circuit, Court of Appeals.

March 9, 2004: The Reserve Bank of India through an affidavit confirms that it has more than Rs 1,505 crore (Rs 15.05 billion) left in the compensation fund.

March 17, 2004: The Second Court of Appeals rules that the victims are entitled to pursue claims against Union Carbide.

April, 2004: All the pre-trial hearings in New York are transferred from Judge Keenan's court to Judge Pitman's court.

July 13, 2004: The US government rejects Anderson's extradition request. The rejection is on technical grounds like non-framing of charges against him in Bhopal.

July 19, 2004: The Supreme Court orders the government to distribute the balance of compensation remaining from Union Carbide's settlement amount (Rs 1,503 crores) among the survivors whose claims are settled.