What will happen to Hyderabad? 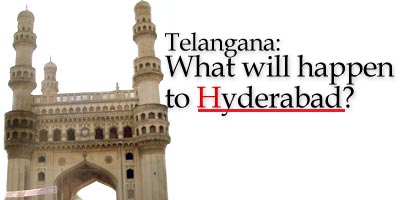 Hyderabad is the biggest and most prominent city in the Telangana region.

But what will its fate be if Telangana is spun off into a separate state since it is also the capital of Andhra Pradesh?

Hyderabad is a sprawling metropolis and cosmopolitan city spread over 688 sq km. It comprises Hyderabad, Secunderabad and 10 surrounding municipalities and has a population of 55.33 lakh (5.533 million).

The Hyderabad Urban Development Authority caters to a much larger area of 1,864 sq km, including portions of neighbouring districts, and a population of 65 lakh (6.5 million).

Dotted with major industries, public sector undertakings, defence establishments, central research and training institutions, universities and professional colleges, it has emerged as a knowledge hub. It has made rapid strides in information technology, biotechnology, medicare and tourism.

With the formation of Cyberabad -- an IT hub -- and the Hyderabad Airport Development Area (to build an international airport), it has witnessed a big spurt in real estate activity.

The Ramoji Film City (a huge movie studio), the Hardware Park, the Bio-tech Park, the Knowledge Park and other research and recreational facilities have come up on the outskirts.

Demographically, almost 50% of the city's population is from other regions of the state and from other parts of the country.

The 'settlers' (as people from coastal Andhra and Rayalaseema are referred to by the locals) have acquired vast tracts of land all around the twin cities and dominate the business space.

The locals believe that outsiders have taken over their land, their jobs and are profiting at their expense. This can become a cause for friction if Hyderabad eventually becomes part of Telangana.

The spectacular display by the Telangana Rashtra Samithi in the recent assembly and general elections has created a scare among the 'settlers.'

There is apprehension about a flight of capital from Hyderabad to coastal towns. The settlers may cease to dominate the city's business and real estate lanscape, fearing opposition from the locals.

This has resulted in a slight decline in real estate prices and a slowdown in the construction boom on the city's outskirts.

Telangana state can be financially viable only if it includes Hyderabad in it.

At the same time, an Andhra Pradesh without Hyderabad will be financially unviable since it has no other big city.

In the second option, Hyderabad will lose its representation in the state assembly and will have to be content with an elected civic body (municipal corporation). But it will continue to send two representatives to the Lok Sabha.

The Majlis-e-Ittehaadul Muslimeen, which holds sway over the Old City of Hyderabad and dominates the civic body with Congress support, has not taken a stand as yet. But it is curious to know the TRS stand on the status of minorities in the new state.

On the eve of the assembly election, TRS founder K Chandrasekhar Rao warned of 'bloodshed' if 'vested interests' tried to create a Telangana sans Hyderabad.

'We cannot compromise come what may, since Hyderabad is the soul and lifeline of Telangana,' KCR said.

Also Read:
What happened to the demand for Telangana?