The memories of Karnal-born astronaut Kalpana Chawla came alive on Thursday when her husband, father and brother visited her college and school in Haryana.

Jean pierre Harrison accompanied by Kalpana's father Banarsi Lal Chawla and brother Sanjay first visited the Tagore Bal Niketan in Karnal where she had studied till the 10th grade.

The three also visited Dayal Singh College where Kalpana did her Pre-engineering. Harrison, however, declined to pay floral homage to the portrait of Kalpana saying she had never liked to be garlanded.

It was Harrison's first visit to Karnal --- the native town of Kalpana, who died with six other space scientists in the US space shuttle Columbia crash on February 1.

An audio-visual film prepared by NASA was shown to the school and college students highlighting the achievements of Kalpana.

In his speech, Harrison said that he met Kalpana in September 1982 in the first hour of her arrival in the University of Texas at Arlington. "Soon we became friends because of many common interests, similarity in habits, hobbies and thoughts of each other which culminated in our marriage on December 2,1983," he said.

He said that she completed her Master's degree in Aeronautical Engineering in 1984. "We moved to Boulder where Kalpana enrolled in the doctors programme in Aeronautical Engineering at the University of Colorado. Kalpana earned her Private Pilot License during this time and whenever possible flew along and among the rocky Mountains in our small airplane," Harrison sid.

Harrison further said that in 1988, they moved to California where she took up work at the NASA Ames Research Centre in Sunnyvale. Kalpana first applied for the astronaut program in 1993, but was not successful.

On her second application in 1994, she was invited to the Johnson space Center for an interview while undergoing her flight training in December 1994 in Kentucky.

Harrison said that he received a message from Kalpana that she had been selected for the 1995 astronaut class.

He said that both of them went to Houston in February 1995 so that she could commence training as an astronaut candidate.

The successful 16-day mission spread in November and December of 1997 prompted a through review and establishment of improved robotic arm procedures, after deficiencies in those procedure led to deployment difficulties in the Spartan satellite.

"During the flight Kalpana took the difficulties very personally, but was ultimately absolved of fault during a post fight investigation", Harrison said.

When Columbia was lost on February 1, Kalpana was doing a job she loved with some of the best friends she ever had in her life. "They were all smiling and having the best time of their lives until the very end," he said.

Harrison said that he and Kalpana were very keen to visit Karnal, but due to strained political relations between India and America could not visit India.

Welcoming Harrison, Dr Ramji Lal, principal of the college demanded the government confer the 'Bharat Ratan' award upon Kalpana. He also demanded through Harrison that NASA should start course in space technology in this college. 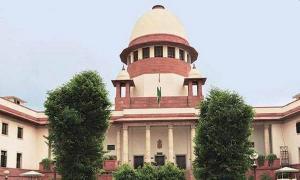