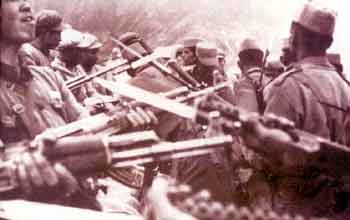 The roots of our problem with China go back a couple of hundred years when Emperor Napoleon and Tsar Alexander met in July 1807 on a great raft moored on the river Niemen at Tilsit in east Prussia to conclude a treaty of partnership against the British, thereby beginning 'The Great Game.' This expression was first found in the papers of Arthur Connolly, a British artillery officer and adventurer whose Narrative Of An Overland Journey To The North of India chronicled his travels in the region in the service of the British empire. As the Russian empire began its eastward expansion, which many felt was to culminate in the conquest of India, there was a shadow contest for political ascendancy between the British and Russian empires -- The Great Game.

Napoleon's waterloo at Waterloo did not see a let-up in the fervour with which the game was played. The Russian longing for a colonial empire and a warm water port did not diminish any and so the game continued. The British response to meet the Russian threat was to establish a forward defensive line in the northern region so that a Russian thrust could be halted well before the plains of Hindustan.

This called for making Afghanistan and Tibet into buffer states and for fixing suitable and convenient borders with these states. At various times, several such lines were proposed.

The most notable of these was the 1865 Ladakh-Tibet/Sinkiang alignment proposed by W H Johnson, a junior civilian sub-assistant with the Survey of India. This line was to link Demchok in the south with the 18,000 feet high Karakorum pass in the north, but it took a circuitous route beyond the Kuen Lun mountains and thus included the barren and cold Aksai Chin desert.

It is believed that Johnson may have had some personal reasons for doing this. He was an Indian born 'Englishman' and in the subtle social graduations that guided an individual's destiny under the Raj, there were limits to where he could go. Johnson could not aspire to either a commissioned rank or a high civilian status with the Survey of India and what better way to improve his prospects than by entering the Kashmir maharaja's service? By greatly enlarging the size of the maharaja's domain by incorporating Aksai Chin, Johnson caught the maharaja's eye. Johnson's survey is not without some controversy. To have completed the journey to Khotan, which lay well beyond the forbidding Kuen Lun range, and to return to Leh in the time he did, he would have had to be covering over 30 kilometres a day. Even if that frenetic pace were possible, it is doubtful any serious survey effort would have been possible. Apart from this, there was the question of the disappearance of a consignment of silver ingots the Khan of Khotan had sent with him as a gift to the 'Lord Sahib' in India. Having thus become somewhat of an embarrassment, he was passed over for promotion. Before long, he resigned from the Survey of India and entered the maharaja's service. He did well here and rose to become the governor of Ladakh. Not a bad reward at all for 'giving' the maharaja an uninhabited 18,000 square kilometres!

That the British were undecided about Johnson's line is evident by the recommendation in 1889 by Ney Elias, joint commissioner of Leh. Elias, who was an authority on trans-Karakoram territories, advised against any implicit endorsement of the Johnson line by a claim on Shahidulla in the far off Karakash valley about 400 kilometres from Leh, as it could not be defended. On the other hand, responding to Captain Younghusband's report on his meeting with the Russian explorer, Colonel Grombchevsky near Yarkand, Major General Sir John Ardagh, director of military intelligence at the war office in London, recommended claiming the areas 'up to the crests of the Kuen Lun range.' Before Whitehall could make up its mind, the Chinese occupied Shahidulla in 1890. To this, the opinion of the secretary of state for India in Whitehall was: 'We are inclined to think that the wisest course would be to leave them in possession as its is evidently to our advantage that the tract of territory between the Karakorum and Kuen Lun mountains be held by a friendly power like China.'

The Indian case for ownership of the Aksai Chin or the white desert rests essentially on the cartographic exertions of a man such as Johnson and we must begin to think about its validity. It's also not without some irony that another Kashmir maharaja's grandiose dreams of an independent state resulted in India's other major problem with another neighbour.

Though Jammu and Kashmir was an independent kingdom, the 1846 Treaty of Amritsar gave the British the responsibility of its security. This made the British responsible for Kashmir's northern and eastern borders with Sinkiang and Tibet. The British, however, never really got around to fixing the border along this line. In 1899, another line was suggested. This was the MacCartney-Macdonald line that excluded most of the Aksai Chin. The British tried to get the Chinese to sign an agreement to this effect. The Chinese did not respond to these moves and Lord Curzon concluded their silence could be taken as acquiescence and decided that, henceforth, this should be considered the border, and so it was. Interestingly this line, by and large, corresponds with the Chinese claim line, which in turn, by and large, coincides with the Line of Actual Control.

But in 1940-1941, things began to change again. British intelligence learnt that Russian experts were conducting a survey of the Aksai Chin for the pro-Soviet Sinkiang government of the warlord Sheng Shih-tsai. It was obviously time for the Great Game again. Once again, the British went back to the Johnson claim line. But nothing else was done to clearly demarcate the border. No posts were established in Aksai Chin and neither were any expeditions sent there to show the flag, as is normal in such situations. For all practical purposes the Raj ceased at the Karakoram range, but by the rules of the Great Game it went further beyond just in case

On the eastern sector the Game was also being played, but a little differently.  In 1826, the British annexed Assam, which then mainly meant the Brahmaputra valley. The hills were first penetrated in 1886 when an expedition went up the Lohit valley at the far end of what is now Arunachal Pradesh. But in the western end of this sector, immediately east of Bhutan, a Tibetan-administered wedge known as the Tawang tract, located alongside the east of Bhutan up to its southern alignment and running eastwards till just west of Bomdila, was considered by the British to be open country.

In 1903, Lord Curzon concluded that Tibet too had now become a possible launching pad for a Russian thrust and by the rules of the Great Game the Russians were to be pre-empted. Thus came about the celebrated Younghusband mission to Lhasa the following year. But in 1907, the British and the Russians came to an agreement that it suited both their interests to leave Tibet 'in that state of isolation from which, till recently, she has shown no intention to depart.' Thus Tibet, like Afghanistan, was to be a buffer state between the two European imperial powers. But by mid 1910, the Chinese were back in Tibet exercising full control. This reassertion of Chinese power caused concern to the British once again. A consequence of this was a renewed urgency to the perceived need to have a buffer between the Chinese and the precious British investments in Assam.

Another forward line was now mooted. This line called the Outer Line included the entire tribal belt except the Tawang tract. Though the then viceroy, Lord Hardinge, initially saw this as incurring too many risks and expenses, he ordered the establishment of 'a sound strategic boundary' in 1911, citing the Chinese policy of expansion as a cause. Thus, by September 1911, the British had decided that the Outer Line, but now including the Tawang tract, should be the boundary with Tibet-cum-China.

With the collapse of the British and Soviet empires, the only inheritors of this squalid and sometimes bloody game are the Chinese and Indians. The other significant difference is that it is no longer a game played by armchair empire builders in Europe with their assortment of secret agents, cartographers, commercial travellers and explorers, but a deadly serious game between the world's two largest nations with the fastest growing economies, and two of the world's major military powers made even more formidable by their openly deployed nuclear forces. The prize now is no longer an entire subcontinent, but merely a barren and desolate desert high amidst cold wind-swept mountains where, in Jawaharlal Nehru's words, 'not even a blade of grass grows.'

Part II: The battle for the border
Part III: Peace with China