'I see no difficulty in talks with Pakistan' 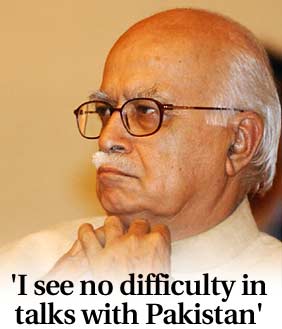 Part I of the Advani interview

In the second part of his interview, Deputy Prime Minister L K Advani tells Senior Editor Sheela Bhatt that as far as Jammu and Kashmir is concerned, his government will discuss the issue and settle it.

But not less than 16 months ago, you used words like 'hot pursuit' against Pakistan and the army was deployed in full strength on the borders. Even now, after the peace initiatives have been announced, the Indian Army launched Operation Sarp Vinash. For four years terrorists were in Indian territory, with 7,000 kilograms of rations and ammunition etc. In view of such realities, it is difficult for some experts to see the logic behind the peace initiative.

You are calling it peace initiative. I would regard it as an expression of the leader of the country. He is saying that this [hostility] is not going to benefit anyone. As someone has rightly observed that J&K is an issue which neither Pakistan nor India can win militarily. This is the observation made by a Pakistani. It is an issue which neither can afford to lose politically

No. On the second part, I would say it may be a great loss for Pakistan politically, I do not know. But for India, it is not so [it's not a political loss] because of its very nature. Look, why is it so that no one feels as agitated about the border disputes we have with China?

Further I would say in 1947, there were people who said how can we reconcile forever with Partition? A time must come when what is today described as Pakistan becomes part of India. This was the situation in 1947. I remember later on, my own party leader, my ideologue Deen Dayal Upadhyaya, was told by Ram Manohar Lohia, that your first manifesto [the Jan Sangh's manifesto] for the first general election in 1952 which he fought under the leadership of Shyama Prasad Mukherjee, said that we stand for Akhand Bharat. Lohia told Upadhyaya: 'Now this particular statement makes an average Muslim feel that if you were to come to power you would attack Pakistan and merge Pakistan with India.' Deen Dayal Upadhyaya replied, 'This is not our aim. After all, today Pakistan is a sovereign country and Partition has been agreed to by our leaders.'

We were of the view that we should not have agreed to Partition. We were of the view that it was not going to help either country. I am still of that view. Partition has not been to the benefit of either country. And I visualise a time when both these countries would voluntarily agree to some kind of a confederation. For me that would be Akhand Bharat.

One can understand your passion behind your vision of Akhand Bharat but logic does not support it. How can it become a reality?

I am not pursuing that matter. I mention it in a different context only to emphasise that if something is said at a certain point of time it should not be taken literally. Even the committed ideologue of the Jan Sangh, Deen Dayal Upadhyaya, interpreted Akhand Bharat in this manner. I am giving his interpretation.

When I speak about it, the desk editor titles [the report as] 'Advani pleads for confederation of India and Pakistan.' I am just saying that the Partition of India was meaningless but both countries should realise this.

In his speech in Parliament on the peace initiative, Prime Minister Vajpayee said very categorically to [Samajwadi Party president] Mulayam Singh Yadav that such an idea was not going to work out. Was it a clear message to you?

I know he said so. There was a reason behind it. Lohia and Deen Dayalji had issued a joint statement over the issue of Akhand Bharat. [Mulayam Singh Yadav is a follower of Lohia]. But I am referring to the fact that the Indian people by temperament are not war-mongers. They can see ahead. They can think in terms of what is in the interest of the country and world peace.

Therefore, they have reconciled themselves with Partition. Therefore, a person like Deen Dayalji thought of a confederation between India and Pakistan. So I see no difficulty in talks with Pakistan. Let us talk. Let us discuss. Wars have taken place in Jammu and Kashmir. A lot has happened during the war.

There is a so-called American solution of turning the Line of Control into an international border. We have seen some comments by Indian experts and diplomats that since India does not want to bleed continuously, the Indian masses might agree to it.

But Sheela, you forget terrorism. Terrorism came after the 1971 war. When the war ended there were many people in India who were unhappy with Mrs Indira Gandhi that she did not see that the Simla Agreement ends the Kashmir problem once and for all by having the LoC converted into an international border. That was a complaint. And she conveyed that unhone promise kiya tha. [Pakistan had promised to end the Kashmir issue.] That [promise by Pakistan Prime Minister Zulfiqar Ali Bhutto] was not taken in writing. That's the mood of the people since a long time.

What's the mood of the people today?

I don't know. I don't know. Today I can only say so far as Kashmir is concerned, I mean Jammu & Kashmir -- we will discuss and we will settle [it]. In Berlin [during his recent trip], Atalji has said somewhere 'koi na koi compromise hota hai. [Some compromises always take place]. That I had told Pervez Musharraf too. After all, when there are wide differences in the world, ultimately some solution comes about. But the need today is that there shall be no war. Overt or covert.

Prime Minister Vajpayee has multiplied his stakes by telling Der Spiegel that he will either have peace or he will retire.

(Reluctantly) It's an important statement. Main kya kahunga? [What can I say about it?]

[The prime minister later appeared to make light of the remark. His officials explained that what he meant was that if his peace initiative failed then perhaps he would have to give up the efforts.]

Don't you think his stakes are really high now?

(No response at all.)

[The interview was conducted before the much publicised leadership issue between Atal Bihari Vajpayee and L K Advani. Advani said Tuesday that Vajpayee would be the next prime minister.]

Part III of the Advani interview