'Security agencies are groping in the dark' 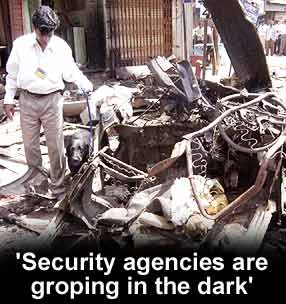 As the investigation into the August 25 blasts in Mumbai continue, there is growing concern about India's vulnerability to terrorist designs.

Counter-terrorism expert and rediff.com columnist B Raman talks to Shobha Warrier on the need for a thorough investigation and what should be done to prevent further attacks.

Do you think our intelligence network and police failed miserably?

I wouldn't say the intelligence network and police failed. What I would say is that the investigation into these blasts has not been as thorough as it should have been.

In the case of terrorism, there are two aspects. One is getting preventive intelligence and the other is, in case you are not able to prevent it, investigate it thoroughly so that you can immediately identify those responsible and neutralise them, thereby make them not commit more acts of terrorism.

Getting preventive intelligence about terrorist organisations is very difficult because it is difficult to penetrate them. The only way is to collect technical intelligence.

When a terrorist act like 9/11 took place in the US, the FBI thoroughly investigated it and came out with details on who were behind it, where were their networks etc. So, they have a complete picture now of what happened on 9/11 and the people responsible for it.

On the other hand, investigation into the previous blasts in Mumbai had not been very thorough. It gives the impression that security agencies are still groping in the dark. They are not able to establish who are responsible, where are their networks, how are they communicating with each other, where have they kept their arms and ammunitions, etc. This is a matter of worry.

Why have the investigative agencies not penetrated these terrorist networks?

I really do not know why they couldn't track the terrorists. Investigation was very thorough about the 1993 Mumbai bomb blasts. Within a few weeks, if not days, the Mumbai police was able to establish a complete network of those who were responsible for the blasts, identify all the people who were involved and also came out with details on how they were taken to Pakistan, how they were trained, etc.

Apart from those who managed to escape to Pakistan, they were able to locate the others in India, Nepal, Dubai, etc.

But in this case, I find not only the Mumbai police but the IB and RA&W failing. I get the impression that their investigations into these blasts right from the beginning were not very thorough.

If they could do such a good job in 1993, they should have been doing a better job now, after ten years...

Police officers in Mumbai say it is difficult to prevent attacks on soft targets. But why then do we have an intelligence network?

It is true that it is very difficult to prevent attacks on soft targets because these terrorists are ruthless enough to kill civilians in public places. But at least you should be able to make a thorough investigation after such an incident takes place.

It is not that we have not prevented attacks on soft targets. There are a number of attacks they have prevented in the past though their successes are not publicised. At the same time, there are many cases where they have badly failed... the assassination of Rajiv Gandhi, the 1993 Mumbai blasts and the Parliament attack in 2001. But at least they were good in the investigation.

Within a few days of Rajiv Gandhi's assassination, they were able to identify the entire network, trail them, and ultimately arrest or kill them. We also did the same in the 1993 Mumbai blasts and the attack on the Parliament.

Some point fingers to the Lakshar-e-Tayiba, some accuse SIMI. Some take it back to the communal violence in Gujarat. Where do you trace these attacks to?

Normally, when there is anger in a community, terrorist leaders try to take advantage of the anger of the people. I won't rule out the possibility. They might have identified people who are angry because of the Babri Masjid demolition or the riots in Bombay and Gujarat, etc. That's the way they recruit people to terrorist organisations.

Everybody knows LeT is involved very actively outside J&K also because in 1995, LeT and other Pakistani organisations have been saying that Kashmir is not their main objective. They see Kashmir as the gateway to India. They first want to liberate Kashmir, then the Muslims of the rest of India and get the entire Indian continent. That is why they want to extend their activities to Delhi, Junagadh and Hyderabad in AP.

Similarly, for economic reasons, they want to target Bombay.

The fact is they have set up a very good network outside J&K. Apparently, we have not made any progress in identifying their network in the rest of India other than Kashmir. Unless and until we do it, these attacks will continue.

For example, in Tamil Nadu, the Coimbatore blasts took place in 1998. The TN police had been able to identify the entire Al Umma set up, arrest them and now they are facing trial. Now, there is no major terrorist threat in TN.

In the case of Mumbai, one can understand one incident taking place, but there are a series of attacks.

From the way the attacks have taken place, do you see a foreign hand, the ISI?

Definitely, these attacks are done in a very professional way. I see the hand of LeT. LeT is entirely a Pakistani organisation, and all its leaders are Pakistanis. It is an organisation supported by Pervez Musharraf, ISI and the military. So, they have definitely a role in these incidents. They must have used local Muslims who are angry for their own reasons.

Since the intelligence agencies have been unable to crack the terror networks, do you feel the terrorists will feel more confident, and more attacks may follow?

There is a great possibility of having more terrorist incidents. But I feel the security agencies still do not know the magnitude of the threat we are facing in Mumbai and other places.

With so many terrorist attacks at frequent intervals, do you feel Indian society will be polarised?

I don't think so. Yes, terrorists want polarisation. Whether we are polarised or not depends on politicians and public opinion. They should not fall into the trap laid by terrorists. What is urgently needed is cracking the network and identifying the terrorists. It is essential to know who the outsiders are and who the Indian nationals are.

Last year Abu Zubaidah, the number three man in Al Qaeda was arrested by the FBI and ISI in Faisalabad in Pakistani Punjab. He had taken shelter in the house of a LeT leader. After his arrest, Pakistani newspapers reported that before coming to Pakistan, he had done a course in computer technology in Pune, Maharashtra.

We should have immediately made a thorough investigation. I don't know whether they did it. It is possible that he could have set up a clandestine network of LeT or Al Qaeda in Pune.

It is quite evident that these terrorists are getting support from local people.

No terrorist can operate successfully unless he has some local support. It is for us to find out who these locals are.

But we should not try to rationalise the act of terrorism by saying that people who are victims of communal riots are angry, etc. We will play into the hands of terrorists with that kind of argument. He may be angry but he has no business indulging in acts of terrorism in public places. We have to ruthlessly act against these people. The moment we start rationalising, things will go out of control. What is happening is, some political parties, public opinion makers and human rights activists are trying to rationalise the activities of terrorists. It is a wrong thing to do.

Time, the US newsweekly, recently published a cover story on how Indian Muslims are being pushed to a breaking point...

It is all rubbish. I would call it vested propaganda being carried out in foreign newspapers, trying to create alienation in the minds of the Muslims in India. We have to strongly counter these kinds of acts. To counter terrorism, we need a systematic approach which is not just a collection of intelligence or investigation alone. Psychological approach is also important.

There is already anger. We have to see that we do not unnecessarily add anything. At the same time, we should prevent this kind of wrong propaganda coming from abroad trying to create a division between Hindus and Muslims. We have to have a holistic approach to counter this propaganda and terrorism, which unfortunately is not there in India.