Sign in  |  Create a Rediffmail account
Rediff.com  » News » 'Time has run out for India-Pak on J&K issue'

'Time has run out for India-Pak on J&K issue' 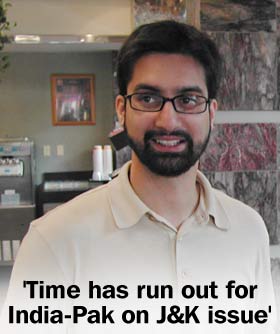 Former chairman of the All Parties Hurriyat Conference Mirwaiz Umer Farooq feels time has run out for India and Pakistan to sort the Kashmir problem bilaterally.

In an interview with Chief Correspondent Onkar Singh at his home in Srinagar, the Mirwaiz, who is also spiritual head of Kashmir's Sunni Muslim community, felt third party intervention was required for a solution, and praised Prime Minister Atal Bihari Vajpayee for extending a hand of friendship to Pakistan during his April 18 visit to Srinagar.

What is your perception of Prime Minister Vajpayee's trip to Kashmir?

To be honest, we had great expectations from Prime Minister Vajpayee's visit to Kashmir. We thought he would give a call for dialogue but nothing of that sort happened. He did not address the All Parties Hurriyat Conference directly. The problem with assessing Prime Minister Vajpayee's speech in Srinagar is that he mostly spoke in metaphors, rather than simple language. So you do not really know what he is saying and what he is not saying. But the tone of his speech in Kashmir was definitely in sharp contrast to the rhetoric.

Why did the Hurriyat Conference give a call for a two-day bandh on the eve of Vajpayee's visit? Was the bandh directed against him?

I would like to clarify that the bandh was not against Mr Vajpayee visiting the Kashmir valley. The basic purpose behind the bandh was to get people's mandate or endorsement for the Hurriyat programme that a comprehensive dialogue needs to be started among all the parties concerned. We were showing our resentment to the fact that no political initiative is being taken by New Delhi to address the problems in Kashmir. The problems are primarily of a political nature.

What did you achieve by this bandh?

We have been able to give a message to the Indian leadership -- very loud and clear -- that we are for peace. We are for dialogue. We hope the Indian government would initiate a comprehensive dialogue process that would address the needs of the present situation in Jammu and Kashmir and the valley in particular.

Why did you withdraw the bandh on the second day of the prime minister's visit?

We felt that having conveyed our message we should not prolong the bandh and that is why as a gesture of goodwill we withdrew the bandh on April 19.

You want the prime minister to start a comprehensive dialogue. But hasn't he appointed N N Vohra to hold talks with political parties in Kashmir?

We have been told that Vohra is playing golf in Kashmir rather then meeting people. What is the mandate given to Vohra? Nobody seems to know anything about it. Prime Minister Vajpayee has asked political parties to talk to Vohra. He in turn makes a statement that whoever wants to come and meet him is welcome to do so. This, I am afraid, is not the right kind of approach. He is acting like a bureaucrat inviting global tenders from construction companies.

Omar Abdullah, president of the National Conference, has called the Government of India to hold talks with the Hurriyat Conference. How do you view this change in stance?

It is ironical that whenever someone is out of power they say the Hurriyat should be involved in dialogue. Ms Mehbooba Mufti was advocating the same before the election. She would go to every nook and corner of the valley and tell the people that the primary aim of the People's Democratic Party was to involve the Hurriyat in dialogue. Today she seems to have forgotten about it.

Now that Mufti Mohammad Sayeed is in power, they are trying to project that they represent the people of Kashmir because they won the election. I hope Omar Abdullah's statment is not merely a political statement, but a statement made out of conviction. If that is so, then I welcome the change.

Would you say he has made this statement more out of compulsion than conviction?

Would be difficult to say so. I would say the People's Democratic Party is not a political force in Kashmir. Mufti came to power by default because the people of Kashmir were sick and tired of voting for the Abdullah family.

The National Conference says it would press for greater autonomy.

I do not believe autonomy will make a difference. If this was an issue as claimed by the National Conference then it was in power for the last five years, what did it do to get more autonomy for the state? This is more of a political farce then anything else.

What do you make of the prime minister's statement extending his hand of friendship to Pakistan?

This definitely is one of the noticeable outcomes of his speech. It is an honest sign but I do not know how he intends to go about it. I would say after the war in Iraq, time has run out both for India and Pakistan to sort out the Kashmir issue. Both America and Britain want a greater role in sorting out the Kashmir problem which they liken to the Palestine problem. International pressure is increasing both on India and Pakistan.

'We have extended our hand of friendship. Let us see how Pakistan responds'

Past failures should not hinder India and Pak dialogue: PM