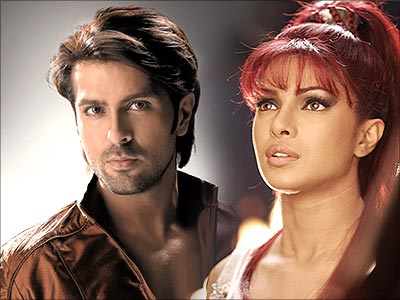 Priyanka Chopra and Harman Baweja have always denied that they are seeing each other. And we would believe them, if not for their giveaway interviews in the latest issue of Filmfare.

The magazine features the two stars and their forthcoming film together, Love Story 2050, in its cover story.

So, we quote what Priyanka told the magazine, and what Harman said, and leave the conclusion to you.

Priyanka: Yes. By this guy I was seeing. On Valentine's Day, he presented me with a CD of all my favourite songs. But what was so romantic about the CD was that he'd taken the trouble to record the songs himself and the prelude of each song had a personal message from him, a reminder of a personal moment we'd shared, something which went with the theme of the song. I thought it was the most romantic gesture ever. Then another time he composed, sang and recorded a song especially for me. He's an awful signer. But it was so cute the way he took the trouble of singing that song for me.

And now, Harman's answer to a similar question in the same magazine.

Filmfare: How about one that's a little more recent and grown up?

Harman: I burnt a CD of 12 of my girl's favourite tracks, went to a recording studio and inserted a romantic couplet that I had written myself before each track. I mixed the sound professionally so each couplet would seamlessly precede each song.

Filmfare: Name one 4 am friend.

Filmfare: So do you have a 4 am friend?

Priyanka: Yes. Her name is Tamanna. She works with British Airways.

Harman is not your 4 am friend?

No. I don't call Harman at 4 in the morning.

Umm, maybe she doesn't call Harman because it's he who does the calling?