Sign in  |  Create a Rediffmail account
Rediff.com  » Movies » What we need to learn from The Love Guru

What we need to learn from The Love Guru

Settled into my plush theater seat, watching as Guru Pitka [Mike Myers] dispenses new-age wisdom, cheekily drops sexual innuendos, and lusts after Jane [Jessica Alba] all in the same scene, I hear a strikingly familiar voice in my head. "What are you meant to learn from this?" it asks me over and over again.

The voice belongs to His Holiness Radhanath Swami, my own guru.

Of course, in most respects, my guru [a respected monk in the Vaishnava tradition of Hinduism] and Guru Pitka [a somewhat obnoxious, ego-maniacal jokester] have little in common. Still, it is oddly fitting that I should think of my own mentor while at a pre-screening of The Love Guru. After all, I am here not as a disinterested movie fan, but as an advocate, both for my particular religious organisation as well as for the broader Hindu tradition. And I am aware that the film's trailer and posters have many Hindu-Americans concerned that it will mock their faith.

In fact, some Hindu leaders are so convinced that the bawdy humor and irreverent attitude of the movie is offensive to Hindus that -- even without seeing the movie -- they are already protesting and circulating online petitions against it.  At the same time, many of my friends [Hindu and non-Hindu alike] can't wait for the movie to hit theaters, confident that it will be the funniest thing since Austin Powers.

By the end of the film, I am neither horribly offended [although I do cringe at some of the more crass jokes] nor terribly amused [although I do laugh out loud at some of the more clever jokes] by The Love Guru. The film is, in my opinion, a silly, irreverent, and intentionally over-the-top spoof of many things at once -- in other words, typical Mike Myers satire. Not as witty as Austin Powers, mind you, but a far cry from the blasphemous attack on the Hindu community that some are making it out to be.

But as I watch the plot twist and turn, absorb the predictably whacky ending, and even stay to watch the final credits roll, that voice in my head -- distinctly the voice of my guru -- grows louder. 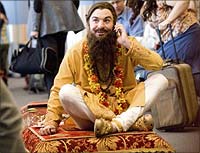 What are you meant to learn from this?

It is a simple principle that my guru has stressed on a number of occasions: every situation, seemingly positive or negative, has been arranged by the Supreme as an opportunity to learn and grow. The world is full of gurus to learn from, he once quoted to me from the sacred Bhagavata Purana. We must simply recognise them when they present themselves to us. If that is true [and I believe that it is], then what can The Love Guru -- both the film and the controversy surrounding it -- teach us about ourselves and our community?

I'd like to share five poignant lessons that I learned from watching The Love Guru.  In deference to Guru Pitka, I present them here using his favorite acronym: DRAMA.

1. D-on't take yourself too seriously. Throughout the film, Guru Pitka acts in outrageous, even inappropriate ways, to get the other characters to break out of their rigid paradigms and laugh; once they laugh, they can let down their guards enough to tackle their underlying problems.

As extreme (and uncouth) as his methods are, Pitka makes a valid point. Religion is serious business, to be sure. But if we take ourselves too seriously, we become inflexible, ritualistic, and judgmental. In the name of defending the faith, we can fall prey to fanaticism and lose sight of the bigger picture. On the other hand, genuine spiritualists are joyous, even playful when it comes to matters of the spirit. 'Angels fly,' a popular saying goes, 'because they can take themselves lightly.' The Love Guru reminds us that it is essential for people of faith to maintain a sense of humor and take the time to laugh [even at ourselves] once in a while. 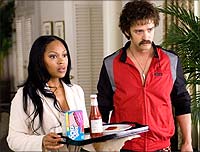 2. R-each out to others. One reason people find satire so appealing is that, like a fun-house mirror, it cleverly replaces reality with contradictions and exaggerations. If audiences leave The Love Guru laughing because the film presents a good-natured spoof that is obviously removed from the reality of Hinduism, it will have succeeded. But if they walk away thinking the caricature they saw on the screen accurately represents Hinduism, then aren't we in the Hindu community largely to blame?

If people are so religiously illiterate that they mistake satire for truth, then mustn't we examine how to proactively educate them? The Love Guru may help to start a conversation at the office water cooler or High School cafeteria table; Hindu-Americans can use that opportunity to clarify misunderstandings and share the profound beliefs and practices that they hold dear.

By putting concepts like the role of the guru or Eastern spirituality into the public space, The Love Guru gives Hindus the choice to either build bridges and reach out to others, or erect walls and remain a defensive, isolated community.

3. A-nalyze the situation. Offense, like beauty, is in the eye of the beholder. This subjectivity is very much the point. Unfortunately, some self-proclaimed defenders of Hinduism seem to think that whenever the faith is depicted in the media, the only response is to cry foul, protest, and play victim.

Not only does this foster extremism [comparisons to the Taliban come to mind], it also undermines the community's credibility in more serious cases. Like the fabled 'boy who cried wolf,' the Hindu who mindlessly protests every time his faith is depicted on the big screen may find himself getting ignored when his community needs help the most.

Personally, I'd rather save my voice and raise it in cases in which Hindus [and other religious communities] are being denied their religious freedoms, or are the victims of hate speech and discrimination. The Love Guru [and the hype surrounding it] teaches us that to most effectively serve our communities, we must first take a step back and analyse the situation, examine the context, and choose our battles wisely.

4. M-aturity entails humility. If The Love Guru is any indication, the Hindu community is maturing to the point that others feel comfortable enough to laugh with -- and not necessarily at -- us. But if we want to fully be a part of the pluralistic American landscape, we have to be willing to take some good-natured ribbing along with everyone else. This, of course, requires both a sense of humor and humility [not coincidentally, humility and humour are derived from the same root]. 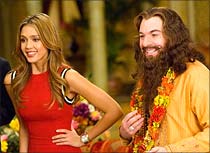 Too often, the Hindu-American community is eager to be recognised in the mainstream media for our accomplishments, but unwilling to be on the receiving end of a parody.  Thus, we convey the message that we are not humble, or mature, enough of a community to be taken seriously.

5. A-ccept responsibility. Could it be that the discomfort that some Hindu-Americans feel about The Love Guru is, in fact, autobiographical?

For many of us, the real issue is not that the film offers an exaggerated, caricature of the faith, but that we're not equipped to balance that caricature with something better. To this, The Love Guru teaches us a valuable lesson and offers us a robust challenge.

Can we be living examples of the tradition and ambassadors of the faith? Can we educate ourselves so that we can answer people's questions and clarify misunderstandings with clear, articulate responses? Can we accept responsibility for our spiritual lives and inspire others to learn more through our own example?

Instead of bemoaning how a comedy movie is misrepresenting us, we can choose to represent ourselves. As Mahatma Gandhi famous said, we must 'be the change we wish to see in the world.' Or, as Guru Pitka might put it, 'Before we can expect the world to love us, we must learn to love ourselves.'

On June 20, Hindu-Americans will have little control over what The Love Guru throws at them. But we will have the choice of how to react. Whatever our opinion of the film may be, The Love Guru seems ready to teach us all something yet -- if we can only muster up the humility and maturity to become worthy disciples.

Vineet Chander is the Coordinator for Hindu Life at Princeton University, and the Director of Communications for the International Society for Krishna Consciousness in North America.