Harry Baweja's Love Story 2050 will launch his son, Harman, in a big way opposite Priyanka Chopra. A science fiction film, Baweja Sr has spent close to $12 million on it. He gives Nithya Ramani the details.

As the title suggests, it is a love story that transports you to the future year 2050.

How did you conceive this concept?

I had this concept in mind right from 1999. I wanted to do a film of this kind, with extensive graphics. It was too early to do it in 1999 and nobody supported me then. I had to wait for the right time and I guess the right time is now. I travelled through India to study how graphics of this kind could be done. Then, I went to USA and met some animators in Hollywood. It was a long process. Right from 2004, we have been working on this script and now finally, we are almost done with it.

What was your reaction when you knew Harman wanted to act?

Harman, like any other youngster, was confused as to what to do. He wanted to do hotel management earlier. At the last minute, he decided that he wanted to become an actor. I sent to acting school and now want to use this script as his launch pad. I was surprised in the beginning but later I believe that one should take up the career that they wish to. So he had all our support. 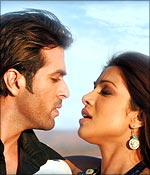 It bothered me initially but later we broke the ice of being a father-son and began the relationship of being a director-actor. So it was difficult for the first few days. Later, we used to discuss scripts and other matters at home, which eased out the relationship and we got used to each other.

How difficult was it to get a producer for such a big budget film?

As I told you, since nobody believed in the concept earlier, I was all alone. I approached many producers but everybody was unsure of the project and did not know how the audience would react. But I was headstrong and I knew I had to do this. So I took it up all on me and thought whatever has to happen, I will bear the loss. Later I found Mr Manmohan Shetty of Adlabs, who trusted me and was willing to co-produce the film.

Kareena was the first choice for Priyanka's role. What happened there?

Yes. Kareena was the initial choice but she opted out for reasons that she will know best. I do not know and did not want to know. We mutually agreed and then we started searching for another heroine.

That was when Priyanka Chopra was doing great in films and had just finished Don. I approached her and said that I was interested in casting her in my film. She immediately agreed and we started off in full swing.

Tell us about Harman and Priyanka's characters.

Harman plays an extrovert while Priyanka is an introvert. They learn from each other what they do not have and that leads to love between the two.

What do you have to say about their looks in the film?

Both have different looks. I wanted to give them a look that is different -- from the future yet not out of this world. A lot of work went into Priyanka's look -- her red hair, eyebrows and costumes. I wanted them to look real.

What role does Boman Irani play?

Boman plays Harman's uncle, who is his emotional support. He is this crazy scientist who takes you to the future.

What kind of work has gone in making the graphics?

A lot of effort has been put in. Since I have done action-oriented films in the past, I wanted this film to stand out. The concept should be attractive. It was risk that I took but I was confident. Designers from all round the world have worked on the graphics. We have the same crew who designed graphics for The Lord of the Rings (WETA Workshop), King Kong and Harry Potter. We have the Animatronics who have worked on the robot and teddy bear, which function through remote control.

Speaking of your past films, except Qayamat, no other film has done extremely good. What kind of reaction do you think people will have when they watch Love Story 2050?

What do you have to say about Imraan Khan's Jaane Tu... Ya Jaane Na also releasing on the same day? Is it going to be a tough competition?

It is immaterial whether any other film is releasing on the same day. I wish them luck too. Competition is something that is always there. This is not going to create any specific competition.

Is it said that Harman looks like Hrithik Roshan. Was he deliberately made to look so?

What kind of homework and references did you do for this film?

We went through a lot of references like books and films. We did a lot of research and took everybody's ideas into consideration. The designing teams also gave their inputs, they keep working on improving it till the end. Even now, all the filming is over but last minute changes need us to shoot certain scenes again.

What kind of films would you like to do in the future?

I love science fictions and would want to make more of such films. I want Bollywood to reach Hollywood standards.

What was your most memorable instance?

There was a scene which we had to shoot on a salt lake. It was a seven hour travel that we had to cover by road. So we travelled 14 hours just to shoot 10 minutes. We were almost at the verge of canceling that location. Somehow we managed to reach there and after seeing the location, I did not have to tell my crew to unpack and start the shoot. They were so excited on seeing the location -- it was so beautiful -- that it was the most memorable and best part of the whole film.