By Syed Firdaus Ashraf
March 07, 2007 10:48 IST
The year 1971 is remembered of the India-Pakistan war; it was a time when India's enemy surrendered unconditionally. About 93,000 Pakistani soldiers surrendered to the Indian army after East Pakistan was overrun, and Bangladesh was born.

The year has now been marked in Bollywood with the film 1971, slated to release on March 9. Starring Manoj Bajpai, Ravi Kisshan and others, the film deals with Indian prisoners of war.

If you are clueless about the 1971 war, here's a quick history lesson:

After the British left the Indian subcontinent in 1947, they divided the country into India and Pakistan. But Pakistan was physically separated into East and West, with India in the middle. The population of West Pakistan was dominated by Punjabis and East Pakistan, by Bengalis.

In 1970, the political party of East Pakistan,m the Awami League, under the leadership of Sheikh Mujibur Rahman, won a majority of seats in the federal elections and became the rightful party to govern Pakistan. However, the military establishment of West Pakistan did not want to give up their power to a party based in East Pakistan. 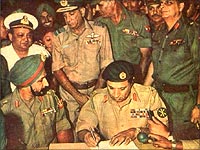 In March 1971, unrest reigned in East Pakistan because Mujibur Rahman was not invited to form teh government. Talks between the political leader of West Pakistan Zulfikar Ali Bhutto and Pakistani military leader and President Yahya Khan failed to reach a compromise.

Mujibur was arrested and the unrest in East Pakistan led to a situation of civil war.

Mujibur's supporters under the banner of Mukti Bahini (the Liberation Army) fought against the Pakistani army and India had to bear the burden of refugees as lakhs of them poured into the country.

The deadlock continued for nine months and the Pakistani army tried to crush the rebellion with brute force. Thousands of people were left dead and many were uprooted from their hometowns as the Pakistani army retaliated ruthlessly against the Mukti Bahini.

Pakistan accused the Indian government of supporting the Mukti Bahini secretly and being responsible of playing an important role in destabilising it.

During this war the Pakistani army captured hundreds of Indian soldiers, on whom the film 1971 is based. 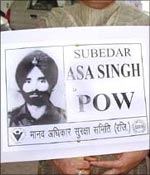 On December 16, 1971, the Pakistani Army in East Pakistan surrendered to Indian forces and signed a peace agreement agreeing to the formation of a new sovereign country, Bangladesh.

Among the 93,0000 Pakistani soldiers who surrendered to the Indian military was their leader Lt Gen A A K Niazi, Commander, Eastern Command, to his Indian counterpart Lt General Jagjit Singh Aurora.

In 1972, Indira Gandhi signed the Simla accord with Pakistani Prime Minister Zulfikar Ali Bhutto and released the Pakistani prisoners of war.

In exchange, Pakistan also did the same but the families of Indian soldiers claim that Pakistan did not release all the Indian soldiers, and many are believed to be still held in Pakistani prisons, a charge which Pakistan stoutly denies.