By Arthur J Pais
March 01, 2007 16:46 IST
Shooting Water, published over a year ago, has started getting attention following the release of the DVD of the film Water, and the Oscar nomination.
Readers would tell you that reading the book, written by director Deepa Mehta's only child Devyani Saltzman, made them appreciate the film better. The book, as its second title -- A Memoir of Second Chances, Family, and Filmmaking --suggests, is also about the reconciliation between Devyani and her mother. It started with her mother inviting her to Varanasi, where Water was going to be shot in the year 1999. Devyani was 19 then.
But the film's shoot was cancelled quickly, thanks to protests by groups worried that the portrayal of widows in the film set in the 1930s would sully the name of the holy city, and give Hinduism a bad name. The film was re-launched several years later and shot hastily in Sri Lanka without publicity. Eventually, it went on to become, with its $5.5 million gross in America and Canada, the highest grossing Hindi film in North America ever.
Devyani's father Paul Saltzman is also a filmmaker though he concentrates on documentaries. Devyani and her divorced parents live in Toronto. She talks about the book, and the film.
Water is finally being released in India. In America too, some people are seeing the film for the first time on DVD. What would you tell them?
To forget about the controversy, if that is possible, and watch the film for what it is -- a work of art about the fight of widows to improve their lives, remarry, and, in a way, their desire for moksha [salvation] on this earth. It is a contemporary film. Remember that women are fighting for a better life today not only in India but across the world. In this country [Canada], and in America too.
What is the best recommendation one can make for the book, apart from the very good reviews it has received.
I am the only person who has been with the film from the moment it was conceived and stayed with it even after it has been released and declared a hit. I was there from scratch to the final edit. 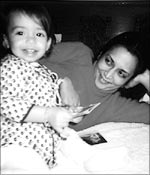 That means you were there when it was shot in Sri Lanka?
Certainly. And the book has plenty of material on it. I was there when it [the film project] was abandoned, and my mother's life was threatened. I was there when my mother went through deep anguish, learned to put the bitter experience behind her, and few years ago suddenly decided she wanted to make the film after all. I was there helping her in Sri Lanka, and I was there even after the film was released.
What were some of the thoughts when you went to India in 1999 to be with your mother?
I was looking forward to knowing my mother better. For the three months of filming would be the longest time my mother and I would have spent together in 18 years.
How long did you have to wait for the reconciliation to blossom?
It started happening when the shooting was resumed in Sri Lanka and we were able to come to terms as never before.
The book is a success and the film is a big hit. And you are part of that success, too.
Much more than my own success, I am extremely happy for the way the film has been received in America, Canada and Australia. And I am sure the film is going to very well in Britain and wherever it will be opening in the next few months, especially in India.
What do you think most about the film's success?
I am very happy for Deepa Mehta, as my mother, and as a filmmaker. She is rightly being celebrated.
The book is also a memoir about separating from your mother when you parents divorced
On a personal level, I wanted to focus on the pain of growing up a child of divorced parent who had to choose to live with just one parent.
What has been the reaction to the divorce part in the book at the book readings?
Wherever I have gone, I have met young people, children of divorced parents from a wide range of backgrounds, who have told me they could connect to the book.
What could be one of the more poignant things you have heard from a reader?
A teenager from Austin wrote to me: 'I could feel everything you write.' 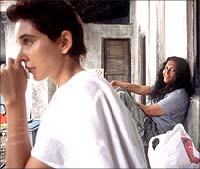 What were some of the things that hurt you most in the divorce?

I was 11 when my parents suddenly decided to separate; my parents' marriage of 18 years was ending. They asked me to choose whom I was going to live with. I chose my father.
Did you wonder why you chose your father?
I felt safe with him at that time. My mother's pain and anger used to scare me at times.
You had to choose once again, isn't it?
When the matter went to the court, I was told I could choose to live with whom I wished, and I chose my father.
But did you keep in touch with your mother?
The next eight years, I visited my mother sporadically. I was also upset with myself for having to choose between my father and mother. I wanted to come closer to my mother too, and I thought working with the film unit in India would help us reconcile.
You write passionately about how you too wanted the film project to continue when you begged the financier not to pull out because of the demonstrations in Varanasi?
I literally went down on my knees and begged him. He [Ajay Virmani] changed his mind to the extent he wanted us to get our shooting permit renewed. We did all that but the demonstrations continued and it looked like we could not continue with the shoot.
You have dedicated this book to your parents. What do you appreciate most in them?
I dedicate the book to my mother for introducing me to her love of books; to my father for teaching me how to turn dreams into reality.
On both sides of your family there seem to be so many people connected with films.
My paternal grandfather Percy Saltzman, who passed away recently, was a film and television pioneer in Canada. And my mother's father was a film distributor in India. My uncle Dilip Mehta was the production assistant for Water.
Wouldn't you want to be in films?
[Chuckles] No. I think there are too many film people in the family.
That was what you said over a year ago. I thought you might have changed your mind.
Not at all. But I cannot say 'never.' I am more interested in being a journalist and write books.
What are you working on now?
A novel. I can't say much but if you ask, I can say its protagonist could be in many places. It will have second-generation Indian characters too. I am also thinking about my upbringing. On one side I come from a Judaic background. And on my mother's side I was raised in the Hindu culture. I was the only child of my parents, a half-Hindu, half-Jewish daughter born during a snowstorm in Canada. I was raised between Canada and India, and the first words I spoke were in Hindi in my nana and nani's home.
Arthur J Pais
SHARE THIS STORYCOMMENT
Print this article