I actually expected Jhoom Barabar Jhoom to be a love story, a fun four-person entertainer. It's not. I expected the film to star Abhishek Bachchan, Lara Dutta, Bobby Deol and Preity Zinta. It doesn't. Sigh. Promos are too misleading.

Sure, the Shaad Ali film features this sub A-list starcast, but the star of Jhoom Barabar Jhoom is a man named Aki Narula, and he does costumes. Shaad's feature-length music video affords Narula the chance to go wild and flex his designer skills, and so we're treated to outlandish dresses and crazy colours, startling cuts and bizarre bling. Bravo.

It's just that maybe films should have a point. Or if not that -- for perhaps that might seem too optimistically greedy a demand -- then at least a story.

Jhoom Barabar Jhoom has nothing to offer but eye-candy. And, unlike Dhoom: 2, it's not sugary enough to lap up anyway, a contrived, half-witted, over-Punjabi offering. Gah.

Anyway, Abhishek is Rikki Thukral, a sashaying Punju lout who likes all things shiny. He runs into the ever-pouting Alvira Khan (Preity), a British girl with Pakistani roots. Both share a table and their love stories, Forrest Gumping into almost-confessional conversation as they sit at Waterloo Station, waiting for a train.

So as Rikki's uneaten sandwich cools off, he describes his dreamy Anaida Raza (Lara), a manager at The Ritz in Paris, and Alvira gushes about her millionaire lover, Steve Singh (Bobby). They're both utterly happy couples, but -- as we discover through an unthinkably out of context series of dargah and mosque scenes, with some Taj Mahal talk thrown in for good measure -- this two-hour conversation has left them convinced they are in love with each other.

Don't get me wrong, I'm all for trademark Bollywood escapism.

What I'm not so gung-ho about, though, is a scriptless film playing out with extreme obviousness. Ooh, there is a twist, but by the time it comes around you're bored and don't really give a damn anymore. Jhoom is a film aimed unashamedly at the Punjabi-Abroad audience, and the only way I see them enjoying it is if they spot a familiar Southall laundry.

In case you were wondering, it's not funny. Unless, that is, your idea of funny just happens to be Abhishek Bachchan saying 'Blimey' in an overdone Punjabi accent every few scenes -- and then pausing to give you laugh-time -- and a pretty actress with a Punjabi foul mouth. (Have you, by any chance, wondered at my constant use of the P-word? I'm sorry, can't help it. This movie tries to be as hardcore as sarson da saag. Only, it's stale.)

Abhishek tries hard, and you have to admire him for it. Not many actors would come in and try their hand at a character only playable by Akshay Kumar, and Bachchan does a valiant job as stand-in. For the filmmaker's part, they've given him the plummiest of lines and the edgiest of shoes; he has the laughs, the definitive protagonist role, and a real character arc. What he does with all of this is, of course, overact to the nines, making Bunty Aur Babli seem like a masterwork.

Lara Dutta is the finest of the four, her character managing a relatively adorable French accent as well as coarse streetwalker-speak with natural flair. The film is quite a revelation as the actress emerges comfortably head and shoulders above the rest of the cast, and is the only one to act in the appropriate key.

Bobby Deol doesn't have much to do in the first half, but is significantly, impressively 'chweet' in the second, and you don't mind him as much as his filmography demands.

And then there's Preity Zinta. Once young and bubbly, today's Zinta looks heavy on both botox and frustration. Her lips might possibly have had one shot of collagen too many, and she pouts as if a boyfriend fawningly compared her to Ms Jolie, lying through his teeth. The result is disastrous, an actress hamming enough to make her co-stars look way better. From accent to emotion, Preity is plain and simple insufferable in this film. Perhaps big-sister roles are in order.

No, the Haneef bhai bit role is the film's best, a pleasant surprise like the cameo from The Kumar's At No 42 cast.

There has always been a warmth to Shaad Ali's work, a certain slice-of-life realism palpable even when the going gets unreal and outrageous. Here, the director succumbs to the gimmicks, and while almost every line in the first half plays for laughs, there isn't even a snicker from the audience. And the gimmicks aren't even clever. Shaad whizzes by in a car nearby, writer Habib Faisal has a two-line cameo.

And the star-kids are put in their place: Abhishek gets to grin about Ash-ji and Amit-ji's statues at Tussauds' and wear a bright red Coolie shirt; Bobby comes on screen with Main Jat yamla pagla deewana playing. And both dutifully ride a motorcycle and sidecar with the Sholay song playing. When, oh when, are we going to let go of these coat-tails? 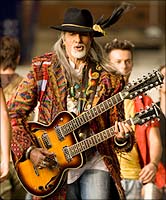 The first half is merely, mindnumbingly boring, while the second gets exasperating. And it's all so inanely wasteful. There's nothing wrong with making a madcap comedy. Next time, though, a plot would be nice. This film doing well would just mean more brightly packaged idiocy will be shoved down our throats, and so I'm praying otherwise. All I can say is that it's stupid.

Oh, and a word must be said about the music. Shankar-Ehsaan-Loy have managed one catchy, potentially hit number in the title track, while the other songs all seem derivative of either Rahman or Reshammiya. But they have their one, titular 'punch' song, and so the filmmakers go all-out with it, thwacking us with versions of it repeatedly. Like the hit of the year at a Punju shaadi, we're Jhoomed till we groan as Amitabh Bachchan pops randomly, meaninglessly out of place and sings a few lines, while the rest of the bachchas go completely overboard, stretching a 'dance competition' version to about 20 minutes, interspersed with snatches of dialogue. Aargh.

Just before a ridiculous Amitabh epilogue, the film ends happily, with a couple kissing. I won't tell you which two are liplocked, but it isn't a surprise. Anyway, it's one of those awkward screen kisses, a glorified, postured moment with the man bending the woman over his knee, and planting one, hard. The shot ends with her legs wobbling in discomfort.

We can relate. We've been dying to walk out.