'I enjoyed working with Aamir'

Tisca Chopra is an all-rounder. In a short time, this talented actress has done films, television and theatre.

After her first break in Platform with Ajay Devgan, she went on to star in other films like Hyderabad Blues II, Loknayak Jai Prakash Narayan and Cape Karma. Her foray in television was with Balaji Telefims' Kahanii Ghar Ghar Kii as Mallika and as Urvash in Sarrkar.

She has also dabbled in theatre in plays like Mahatma v/s Gandhi and Salesman Ramlal.

Now, Tisca has bagged a role in her first big movie, Taare Zameen Par, opposite Aamir Khan. She plays one of the four principal characters in the film.

Rajul Hegde found out more about this actress who may become Bollywood's Next Big Thing.

Mallika in Kahaani Ghar Ghar Kii was a negative role, but you became very popular. How was the experience? 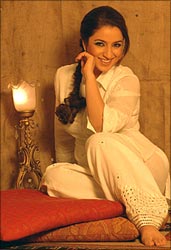 People liked it because they couldn't relate to my character. Television is a different medium and I am happy I could reach out to different kinds of audiences. If Balaji offers me an interesting role again, I will definitely accept it.

Your character Urvashi was highly appreciated in Sarrkar. How did you feel?

It was a great experience. The drunken scene was challenging because I've never done such a thing before. And I was very nervous.

How was it working with Aamir in Taare Zameen Par?

It was a great and satisfying experience.

What did you learn from him as an actor?

I enjoyed working with him. He understands the importance of every character. I have learnt so much that I cannot explain. Everyday was a learning experience. There was so much harmony on the sets. Aamir has a very broad concept of filmmaking.

Is Aamir truly a perfectionist?

Yes he is a perfectionist, so am I. So I enjoyed it.

What is your role in the movie?

I cannot reveal it. The only thing I can say is that the movie will be released during Diwali.

What other TV shows are you doing?

I recently finished shooting for a mini Pakistani series in Dubai.

I am also anchoring Main Hoon Na, a reality weekly show produced by Applause Entertainment. I have already shot the first round.

What are your future plans?

I am planning to start my own production house and am keen on exploring some new ideas. I am scripting something international and it is almost done. It's very difficult to sit down and write. I write only when I am not shooting.

I also plan to do a play. I have done a workshop with Nasseruddin Shah and will continuing doing it whenever I am free.

'Tare Zameen Pe is unique because of its story'