Seemingly, a big event for a nurse, who hailed from a village in Kerala, Jiju jumped at the chance to be on the show when his brother-in-law presented him with passes. Besides, his favourite star Shah Rukh Khan would be there.

Jiju, who recently shifted to Mumbai, had never watched KBC earlier, when it was hosted by Amitabh Bachchan, as his home did not have a cable connection.

Asked about the treatment on the sets, Jiju said the rest of the audience was well taken care of. "We were given excellent food at lunch time," he said.

Review: No high-fives for SRK yet 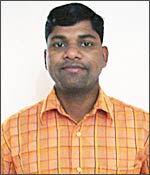 The shooting commenced at 2:30 pm.

"The first contestant was a girl from the last episode," he recalls. "But she got out after just five questions."

The next contestant was chosen after a break at 3 pm. "He answered about six questions and was out as well," Jiju said, adding that shooting stopped at 5 pm. After a half an hour break, shooting resumed. But the contestant had to go.

Being on the show was an eye opener for Jiju. "I always thought that the host memorises his lines and says them on the show. But it is not like that. When the show started, Shah Rukh had to read from a big screen," he added.

However, Jiju got to see the brilliance of the actor when he faced the contestants. "Once he started with the questions, it flowed easily. Whatever he said and did was not planned. He was so spontaneous, smart and full of life and energy," he gushed.

Review: SRK works it, and how!

Jiju also recalled the way the actor interacted with the audience when the show ended. "He went up to the audience sitting in the first row and shook hands with them," he said. "He even kissed an old lady's hand, who kissed him back."

Jiju's respect for the actor has now increased. "Before the show, I had thought that as a big star, he would be reserved. But what he did to the old lady changed my opinion about him," he said.

Big B or SRK: Who rules the hot seat?

The fact that King Khan made mistakes only endeared him to Jiju. "I can't recall all of his retakes. But there were two instances where he had to give at least four or five retakes. Once was when he asked a question on Kozhikode (earlier called Calicut, a city in Kerala). Shah Rukh just could not pronounce Kozhikode right," Jiju recalled.

So, did he like the KBC experience? "I will cherish this all my life," Jiju smiles.