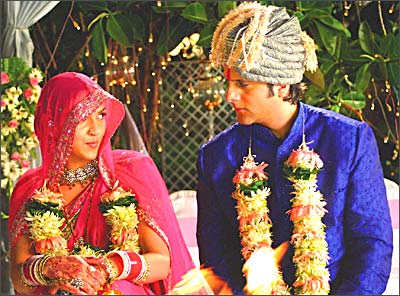 You have seen the 'just married' sign behind a car umpteen times, Bollywood using the moment to roll the end credits and end on a happily-ever-after moment.

In the upcoming Just Married, she starts her film with the marriage of her lead actors Fardeen Khan and Esha Deol, coming together for the third time after Shaadi No 1 and Pyare Mohan.

The duo get married in Bangalore and are supposed to spend their honeymoon in Ooty for five days.

Unlike films where boy meets girl, woos her and proposes, this one aims to break the mould and look at life beyond the wedding.

The questions posed are interesting: Will the newlywed couple find love? Or will their honeymoon be the beginning of the end?