February 22, 2007 18:34 IST
Devyani Saltzman's account of the protests in Varanasi against the shooting of Water starts on the day eight-year-old actress Urvi Gokani is getting ready to play a young widow called Chuyia. She is awaiting instructions from director Deepa Mehta, Devyani's mother.

Though Mehta continued to shoot for a while in Varanasi in 2000, the protesters grew more vehement. After a few days, the shooting of Water in Varanasi came to an abrupt end.

The description of the following shot from Devyani Saltzman's book Shooting Water unfolds against the set of a burning ghat reconstructed in a hotel garden in Varanasi. The scene was set in the 1930s and the young widow is wearing a sari that covers her body and one shoulder. 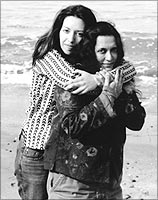 My mother sat on a black canvas chair, facing the platform. In front of her was a video monitor, attached directly to the camera so she could see the shot as it happened. Chuyia's head-shaving, the ritual that transforms the child-bride into child-widow after her husband's cremation, was one of the first scenes in Water. It was my job to make sure the video feed remained connected to the monitor and to run back to the camera truck if we needed anything.

My mother wore a blue cotton kurta printed with patterns of white-and-yellow flowers. Her hair was pulled back in a tight ponytail. The crew gathered behind the monitor, out of view of the camera.

"It looks like Sunday brunch on the lawn," my mother said. But it was a tense moment -- our first shot.

The barber took Urvi's long black hair in his hand, and held a large pair of metal scissors close to the nape of her neck. Two crew members turned on the gas fires; the bright orange flames were now visible in he background. The camera sat low to the ground. Facing Urvi. Giles Nuttgens knelt behind it with his on the viewfinder.

"Quiet on the set!" Dylan, the first assistant director, yelled.

The crew fell silent. I crouched beside the monitor, holding the video feed in my hands. We had only one shot at this. Once Urvi's hair was gone, there would be no second chance.

My mother looked at Urvi, her race cast downward, the barber's hand holding her head forward.

With one clean cut, Urvi's long hair fell to the platform. The barber began cutting away what was left.

Below, right: Seema Biswas (Shakuntala) with Sri Lankan child actress Sarala (Chuyia) when Water was shot in Sri Lanka a couple of years after the original project was abandoned. 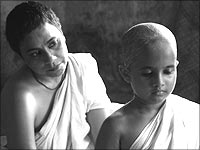 I moved aside as she got up and walked toward Urvi and the barber. She placed her head on the girl's head and began telling the barber to continue cutting, lifting Urvi's head slightly so the camera could capture her transformation to widowhood.

She touched Urvi's head gently. It was a feeling I had forgotten long ago. I watched as she held the girl's chin and gave her words of encouragement. Urvi smiled shyly, with complete trust in my mother's direction. I wondered if I felt that trust once, searched my memory for such simple moments of joy.

My mother returned to her seat behind the monitor.

The barber continued to cut. Urvi was stoic, as if she had accepted her fate with a child's courage. Fine strands of hair fell along her bare back. They caught on the folds of her small white sari, pieces of a lost childhood. I could see Urvi's mother standing at the edge of the crowd between Shabana (Azmi) and Nandita (Das). Her eyes were closed. She was a Gujarati housewife living with her family in a suburb of Bombay. She watched with difficulty as her daughter's hair was cut. Urvi's hair was now stubble. The barber rubbed water into her scalp as my mother watched the monitor.

As the barber pulled out a flip-razor to begin shaving, sounds started to fill the garden, rolling over the flowerbeds from the direction of the road. I looked over my shoulder, but couldn't see anything. A high white wall surrounded the hotel compound. The camera kept rolling, but the sounds were coming closer and growing louder. Urvi focused on the ground as the barber pulled the razor over her scalp, adding a handful of water every so often. The sound was now on the other side of the wall. It was the sound of a chanting mob.

"Cut!" My mother turned and looked toward the road. 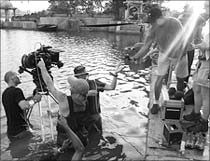 Giles stood up from the camera. The voices were clear now, a wall of sound just outside the iron gate.

"What are they saying?" Someone from the non-Indian crew asked. How could they know? I had trouble believing what I was hearing myself.

"They want to kill us," I said quietly.

"What?" Someone was speaking to me, but I could barely hear above the mob.

"They say they want the film dead. They want Deepa dead!"

Urvi sat hugging her legs, frightened. Her mother had come and put her arms around her. Aradhana Seth, the production designer, was walking back from the gate. Her face was solemn.

"It is a big crowd. They are burning your effigy, Deepa."

I wondered how we could ever continue. The crew stood frozen in the safety of the back garden, as the chanting grew louder on the other side of the wall. My mother looked at Aradhana and started laughing. She took a sip of tea a production assistant had brought her in a white china cup.

"What is my effigy wearing?" 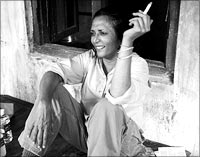 "Wearing?" and then Aradhana smiled. "A salwar kurta."

"Well. It's lucky we aren't doing sound for this shot. Let's keep going."

We continued to shoot. Urvi sat bravely as the last strands of her hair fell, and I watched three hours of work -- which would eventually produce two minutes of silent footage -- as the all-engulfing sound of 'WATER PICTURE MURDBAD' filled the garden.'

The next day financier Ajay Virmani, convinced that it is difficult to shoot the film, says he will cut his losses and pull out of the production. Several members of the crew as well as Shabana Azmi and Nandita Das offer to work free. Here is Devyani Saltmzn's account:

Ajay was silent. He rubbed his hands together and looked out of the window. As we waited for his answer, I started to feel something building up inside me. It was as if I saw the situation in stark relief for the first time. We were fighting for freedom of expression in a country that called itself the world's largest democracy. More importantly, we were about to lose the opportunity to make a beautiful work of art, a story about a very real group of women and their search for moksha.

I got off the chair and knelt in font of Ajay, I told him how important I felt the film was, how terrible it were shut down. Surrounded by the crew, I begged him not to pull out. It was the first, and only, time I cried over a work of art. My heart was racing.

Below, left: Deepa Mehta with Devyani as a child 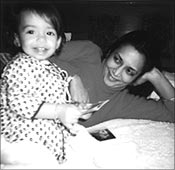 Ajay agreed to keep his investment in, allowing us go back and shoot as long as Mom got re-permission from the Ministry of Information and Broadcasting, and get the assurance of the RSS that they would pull back the protestors. We had two days to do it.

The meeting with RSS leaders was successful; they demanded certain words be removed from the script, and the name of the central character not be called Janaki. It became Kalyani. But the protests continued, and the shooting came to an end.

Excerpts from the book Shooting Water (US edition) are used with permission from publisher Newmarket Press. Copyright, Devyani Salzmann.

'I'll wear a sari to the Oscars'