When he burst on the scene a couple of years ago, Rabbi Shergill was a breath of fresh air in a music industry obsessed with cheesy remixes and tasteless titillation.

And then he dropped out of the radar. He performed live, but apart from a music video here and an appearance there, he was largely missing in action.

The soundtrack of Delhii Heights -- Rabbi's debut at composing music and writing lyrics for a Bollywood movie -- shows the guitar-slinger was no one-album wonder. The music is as fresh and stripped of pretension as his album was.

It kicks off with the best of its six songs, the almost U2-esque Dilli. Tastefully sprinkled with delay driven guitar touches, it's a great road song, as much an ode to youth -- with lyrics like Avaraan thhi raat/aur sarkhein thee sab mere baap ki -- as to the capital. 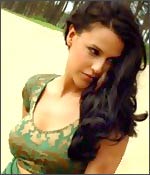 The bottom line: Delhi Heights is a young, fresh and welcome soundtrack. Rabbi's songwriting and singing has an honesty to it, which he fortunately has not abandoned in his first Bollywood outing. Let's hope the movie lives up to its songs.