This one's a strange film -- a series of staccato, punctuated episodes and incidents about folk living around a traffic signal. When you hear of it, it sounds like an interesting concept. But however you may try stretching it, it just does not have enough meat for a full length feature film.

It might have been great to explore in a short telefilm, but how many incidents and how many times can you see and be interested in about a traffic signal community of sorts. That's the inherent problem with the concept.

Now comes the execution, which has Madhur Bhandarkar-gone-wrong written all over it. All the usual suspects are there -- the pedophile, the gay (Bobby Darling, surprised?), rough language, the pretence of showing a behind-the-scenes glimpse and so on. Thing is -- the audience has grown up and the same things don't shock or surprise anymore. So when the film mentions that begging is a multi-crore business, and we see a beggar-during-day go to a multiplex at night, we are amused, but it doesn't rock our world. Again, we are too familiar with films showing the gritty underworld-politician nexus to gape anymore. 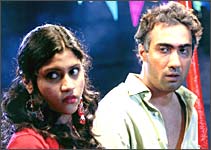 The film rambles on with a series of disconnected happenings -- an executive and his wife fight in their luxurious car at the signal, a regular believes giving money to beggars will help his prospects, flower girls fight in the middle of the road, a beggar boy lies about his father being dead, just when the 'dead' man sits up behind him.

The stories are entertaining in themselves, like the one where a beggar child spends his hard earned money on a fairness cream. But at some point, one wonders when the disconnected episodes would stop and the film would begin.

Interspersed among all this, are superficial glimpses at the lives of our protagonists. The good-hearted goonda Silsila (Kunal Khemu) who's more street cool than underbelly, Rani (Neetu Chandra) who's come to Mumbai to make a living selling ethnic clothes, a junkie Dominique (Ranvir Shorey) who fleeces money from ordinary folk giving a sob story, a prostitute Noorie (Konkona Sen Sharma), Jaffar the local hafta collector who works for big boss Haji (Sudhir Mishra), and a series of beggars who make a living at the signal.

If you know the characters, you know the story. But till the very ending, this film has no semblance of a narrative. Perhaps the director thought that 'snapshots from the lives at a traffic signal' would be amusing enough for the audience, but it is not so. As was the case with Corporate, Traffic Signal begins to get involving towards the very end and a few scenes from the second half are moving. 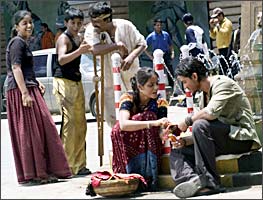 What saves this film is the cast that has given noteworthy performances. Kunal Khemu manages to shoulder the film, and Neetu Chandra is graceful and watchable. Sudhir Mishra, with his towering personality and evocative eyes, looks every part the enigmatic mafia don. Konkona Sen Sharma is dependably good. Ranvir Shorey is truly impressive, and one hopes to see him in meatier and more challenging roles. Even the actors who have done bit roles as beggars (most of them stage actors), including the kids, are astonishingly good. Bhandarkar shines again at extracting great performances from his actors.

Technically the film is okay. There is not much effort made to make the film look exceptionally good or shoot it differently. It's functional, as is the background music. The songs are strictly okay, but the one song Yehi Zindagi, picturised with montages of the protagonists' lives, is where the film comes alive for a few minutes.

Traffic Signal also has a major drawback in that it's been dubbed, where a story like this was asking for the more-real sync sound.

This is Madhur Bhandarkar's final of the trilogy that began with Page 3 and Corporate. It's sad to observe that his films have gone progressively below par. You watch this film glazed, get amused at times, entertained at others, but when you leave the theatre exactly the way you entered it, with no new thoughts or feelings, you wonder at the point of it all. And really, there's nothing more disappointing than a pointless film.