Why Owen Wilson slit his wrist 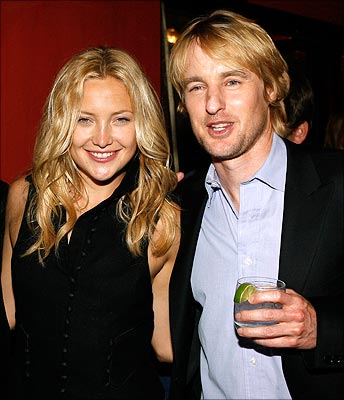 Splitting from ladylove Kate Hudson is what drove Owen Wilson into such depression that he tried to commit suicide.

Wilson and Hudson hooked up on the sets of their film, You, Me and Dupree. However, a few months into the relationship, they decided to call it quits late last year.

The split, pals of Wilson say, hit the actor so hard that he went into a 'cloud of depression'.

'He seemed to go into a cloud of depression. He was down and didn't open up. He kind of changed,' The Sun quoted a pal, as saying.

And pals fear that an already depressed Wilson was pushed over the edge by magazine photos of Kate, 28, kissing her new beau Dax Sheppard.

Wilson is currently recovering in hospital after reportedly slashing his wrists over the weekend. Reports also suggest he had overdosed on pills.

The Santa Monica police, in the meantime, have confirmed that officers responded to an attempted suicide at the actor's house, reports People magazine.

The department's 'Call for Service Report' posted online shows that the call was logged as 'Attempt Suicide' -- the first official confirmation that the actor tried to take his own life.

Wilson, in a statement, has asked the media not to intrude on his privacy, saying that he needed time to heal in private.

'I respectfully ask that the media allow me to receive care and heal in private during this difficult time,' he said.