Why Rasika Mathur is one funny woman 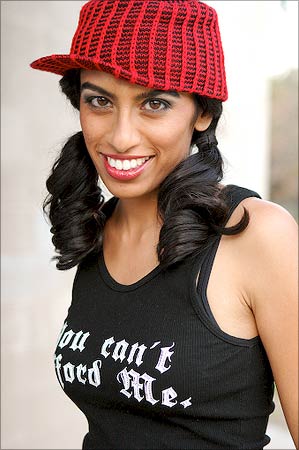 Indian Americans are known for a great many things -- business acumen, success in the medical profession, being the backbone of Silicon Valley. But humour? Do funny desis really exist? Isn't Russell Peters -- the Anglo-Indian stand-up comic from Ontario -- the only one? No, he isn't.

In a series of portraits, Rediff.com introduces you to the funny men and women who comprise the funny bone of the Indian-American community. Presenting the very talented Rasika Mathur.

Nilam Auntie breaks into any conversation with desi comic Rasika Mathur. Sometimes it's in the form of a mischievous cackle; sometimes it's in the 'dearie' tacked onto the end of a sentence; and sometimes it's a facial expression that so transforms Mathur's face that the watcher doesn't even see the 30-year-old petite Indian-American in a T-shirt and khaki capris on the edge of her seat.

For Mathur's persona of the 49-year-old Nilam Auntie, with her red bindi, starched sari and crackly voice, is so convincing her MySpace Web page gets hits from middle-aged Indian men looking to settle down!

Part I: Indian Americans can be funny too

Mathur earned her first laugh while doing "goofy speeches in my 12th grade speech class. I was making an announcement, and decided to make it a comedic one about procrastination. I started off by saying, 'Our first meeting will be next week' and got a huge laugh."

She has been making audiences laugh ever since. Mathur first took the stage as a stand-up comic while a freshman at the University of Texas at Austin in 1995. All the South Asian students were doing "songs and dances" for the talent show. She decided to spice up the evening, and the result was her first routine.

After graduating, she moved to Chicago to work in advertising for Leo Burnett. In the evenings, she pursued her real passion: Improvisation. But it was telling her parents what she wanted to do for a living that was the hard part. "It's like coming out," Mathur exclaims. "You have to tell them when they're sitting down."

More than five years later, her parents get offended if she doesn't use them in her comic routines. A caller who gets Mathur's voicemail will hear a message instructing them to leave a "very serious message" because her father has requested she not be funny on her voicemail. Then follows an imitation of her parent's voice, scolding her into seriousness as it is now "time to get serious" as she's in Hollywood. Now, Mathur says with a grin, "If people don't laugh at my routine, my mom will say, 'You should have talked about your father'."

Is a lack of laughter a common occurrence for Mathur? Occasionally. Especially when there are older people in the audience, she says. "Sometimes I'm thinking I'm bombing, but when I go outside, people are like, 'Beta! You should be on Jay Leno!'" I think South Asians have trouble expressing themselves in public, especially the older generation. They do the polite laugh, the titter. And sometimes, I'm just plain offensive!"

But she loves to perform for the "older generation." Partly because they can relate to middle-aged Nilam Auntie, Mathur's favorite character, and partly because she doesn't want to just make fun of people for the sake of mocking them. She wants to prod her audience into thinking about why they behave the way they do.

"My jokes are often self-deprecating," she says. "I make fun of the really heartbreaking events of my life, the things others used to laugh at me for. Then it's easy for people to laugh at my show, because they're not the targets. And that allows them to be more self-reflective, and make them look at themselves."

Mathur's brand of humour used to be directed specifically at the South Asian community. She used to ask different versions of this question: Why do South Asians do this? Now, she wants to switch to asking: Why do I, as a human being, do this? And, of course, the vehicle she uses to ask these questions is whatever character she's impersonating.

Her beloved Nilam Auntie, for instance, was created on the spur of the moment the morning of her cousin's wedding. She had four facts about her cousin's prospective groom: That he was anal-retentive, that he liked chai, that he had a goatee, and that he was an actor. She narrated those four facts through the character of an auntie, someone who could get away with saying, 'Real men have a goatee and drink chai' (This, in a quavering, crotchety, auntie-voice, of course). "And that," says Mathur, "is when I thought, this character is gold."

That's what's different about Mathur's routine. It's no average traditional stand-up routine with jokes about political leaders and their latest faux pas. When she's on stage, Mathur speaks to her audience in various guises, of which Nilam Auntie is only one. Others include Lucinda, who mans a suicide call centre hotline, her "mean" persona on the hip-hop version of Who's Line Is It, Anyway?, the MTV show Wild 'N Out, a Miss India-like character for the sketch comedy troupe Stir-Friday Night!, and more.

"Traditional stand-up doesn't let me say everything I want to," explains Mathur of why she prefers character-driven routines. Her favorite auntie, for instance, allows her to comment on anything she wants, "and she's big on audience interaction," a plus for the comedian.

Part IV: A comic rebel with a cause