Padmini, legendary actress of yesteryear and a famous exponent of Bharat Natyam, died of a heart attack in Chennai at 3 am Monday morning.

Earlier: Actress Padmini to leave US, return to India

The actress, who was amongst the first heroines to make it big in the Tamil film industry, breathed her last at Apollo Hospital. She was 74.

Padmini -- who was the second of the three famous Travancore Sisters, along with Lalitha and Ragini, who passed away earlier  -- made her last public appearance at a function to felicitate Tamil Nadu Chief Minister M Karunanidhi on September 23.

Karunanidhi, on hearing of her death said, "I do not know how Death had the heart to swallow a beautiful and rare artiste. She was a star among the stars."

Padmini acted in more than 250 Tamil, Malayalam, Hindi, Telugu and Kannada films since 1949.

Born in Poojappura in Thiruvananthapuram, Kerala, on June 12, 1932, Padmini made her debut in the Hindi film Kalpana. Her first Tamil film was Manamagal (1950) made by the legendary N S Krishnan. 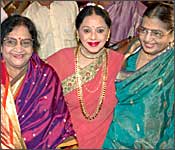 If Gemini Ganesan-Savitiri and MGR-Saroja Devi were a formidable pair in 1950s and 1960s, the Sivaji-Padmini combination was lethal in films like Uttamaputtharan and Thillana Moganambal. Movie watchers remember her powerful dialogue delivery in Theiva Peravi. Padmini also gave a stupendous performance in MGR movies like Mannadhi Mannan, Rani Samyukta and Madurai Veeran.

The three Travancore Sisters did act together in the Tamil film Thoothu Thooki.

Padmini, affectionately called Papi, had a style of her own and gave memorable performances in her films.

During the Indo-China War in 1962, Padmini went to army camps and entertained soldiers with her dance-drama performance. Late Prime Minister Pandit Jawaharlal Nehru was impressed with her performance as a teenager.

She was a member of the Congress party and gave speeches in many political meetings during the 1967 and 1971 Lok Sabha and assembly elections for the party.

Padmini was showered with accolades for her performance in the Hindi film Chanda Aur Bijli with the late Sanjeev Kumar.

Nicknamed Natiyaperoli (a great light of dance), she would completely involve herself in the characters she enacted -- whether she played a dancer in Thillana Mohanambal or a middle class Brahmin woman in Vietnam Veedu.

She ended her film career after her marriage to Dr K T Ramachandran, and left for the US, where she started the popular Padmini School of Fine Arts in New Jersey.

But she made a comeback after marriage with Malayalam films Nokkethahtadoortahtu Kannumnattu and Vashthuhara, which made her immensely popular among new generation film buffs.

A disciple of eminent choreographer Guru Gopinanth, Padmini hailed from an illustrious family of artists. Besides her sisters Lalitha and Ragini, her cousins Sukumari and Ambika were also popular in South Indian film world.

Padmini is survived by a son, Prem Ramachandran, who works with Warner Brothers, and lives in the United States.

A classical dancer, Padmini started learning dance at the age of four and entered the film industry in 1949.

Family sources said the funeral will take when her son returns from the US.

Actress Padmini to leave US, return to India