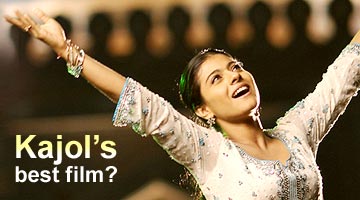 She stormed the screen in 1992 with Bekhudi, and while the film was a dud, critics and audiences were stunned by this remarkable debut. She proved them right with her very next film, the blockbuster Baazigar.

Since then, Kajol dominated the 1990s with massive hits and critically acclaimed performances, and constantly lit up the screen, film after memorable film.

And what movies they were... From Dilwale Dulhaniya Le Jayenge to Karan Arjun, from Gupt to Dushman, from Pyaar Kiya To Darna Kya to Sapnay, Kajol's done it all.

This Friday, she returns to the screen with Fanaa. And we take the opportunity to ask you a question:

Which is your favourite Kajol movie?