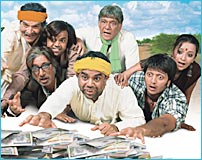 In an interview with rediff.com, Priyadarshan said he had come to Bollywood to make serious movies. So he made Gardish and Virasat. But after the huge success of his comedy film Hera Pheri he was tempted to make more such films.

Most of his comedies are remakes of his Malayalam movies or other films from the South. But his latest -- Malamaal Weekly -- is not a remake. It's a script Priyan wrote himself, after a gap of three years.

Priyan hopes to remake Malamaal in Malayalam, if it does well. But after watching the film, I doubt it will do even half the business as his last flop, Kyon Ki.

Priyan: Back with Malamaal

Malamaal Weekly is the story of a village called Laholi, where the Thakurani (Sudha Chandran) and her brother Baje (Rajpal Yadav) harass the poor villagers, all of who are under her debt.

But Anthony dies after informing the lottery ticket company about his ticket details.

Lilaram learns that Anthony, the winner, is dead. So he tries to steal the ticket. In the process, Balwant (Om Puri) the milkman, also finds out the secret, and wants a share in the profits. 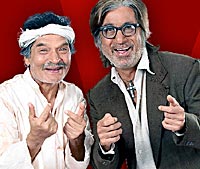 Lilaram and Balwant hide Anthony's dead body, but Kanhaiya (Riteish Deshmukh) sees them, and demands a share as well. Soon, the entire village knows the secret, and wants a share.

The big problem, however, is that the villagers now have to hide the truth from the local inspector (Arbaaz Khan). Will they manage that? Watch the film to find out.

Or maybe, you should not.

Though the plot sounds decent, the execution is terrible. The film seems to have been stretched unendingly, the jokes fall flat, and loud performances by the entire cast -- including Paresh Rawal and Om Puri -- make the film a no-show.

Paresh Rawal, who has become a fixture in Priyadarshan's movies, is average here. And we wonder why his teeth need to be so dirty -- no explanation is ever offered. He has some of the best dialogues in the film, yet this comedy does not bring on too many laughs.

And Malamaal is not without flaws. Rawal is the only educated person in the village, even though he hardly has any grey cells. But the same person suddenly comes up with clever plans of how to dispose of the body, divide the money... 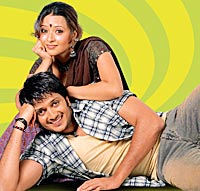 The music is bad, but Rakhi Sawant's item number takes the cake. It is, by far, the worst Bollywood song ever, choreographed just as badly.

The film has nothing worth praising.

Mr Priyadarshan, you have done quite a few good movies earlier, but this Friday, you have sorely failed!