Salutations are in order, tremendous fanboy salutations to director Bryan Singer for bringing the Man of Steel back to life with such inspired, classic energy that it's increasingly hard to believe we haven't seen him on screen for almost 20 years.

Bringing a well-loved character to the screen is always a massive task, and Singer has finally gone and broken the iconic-franchise mould. Every director from Tim Burton (Batman) to Christopher Nolan (Batman Begins) has started his film with an origin story, telling us how Bruce Wayne, in their version, became Batman.

But Singer -- no stranger to superheroes himself, having made one of the finest films in the genre, X2 (and predecessor X-Men) -- wasn't buying. The director was 13 when he saw the first Superman, and decided the story didn't need retelling. Richard Donner's first film (and, to a considerably lesser extent, Richard Lester's Superman II) encapsulated the Kal-El origin mythology fabulously, and left no need for retelling. Why waste time re-emphasising a tale everyone knows?

So, Superman Returns begins with an introductory text akin to the Star Wars films, in a world we already know well. I would advise viewers and comic-book fans to refresh their memory of Donner's 1978 classic (and, ideally, Superman II as well) before embarking on Singer's fondly referential labour of geek-obsession. The director called it his Superman III at a comic-book convention earlier this year, which clearly means he wants to take the well-aimed franchise forward, rescuing it from the mediocrity of Supe III and IV. Kudos, Bryan, you make us proud.

As the aforementioned text elaborates, astronomers discovered some remnants of Superman's home planet, Krypton, leading our man Clark to abandon Earth and explore. For five long years, Superman has vanished and, if Lois Lane is to be believed, hasn't left as much as an explanatory Post-It note. But the Man of Steel left in hasty hope and, after realising Krypton was well and truly dead, returned home to Martha Kent -- when was the last time we saw Eva-Marie Saint share a film with On The Waterfront alumnus Marlon Brando, anyway?

The Kent farm at Smallville looks literally out of the early movies, and fans of the fine television series will burst with enthusiasm as Clark takes a second to ponder his first time aflight. But Kent isn't a happy man, wielding a television remote and watching excessively depressing news reports. War, riots, terrorism: he's been away far too long.

Luckily, the Daily Planet hasn't changed one bit. Clark makes his way awkwardly past the persistent newspaper office hustle, and while photographer Jimmy Olsen (Sam Huntington) is pleased as punch to see Mr Kent, the editor Perry White (Frank Langella) can't be bothered with pleasantries; he has a paper to run. As Clark discovers, star reporter Lois Lane has finally won a Pulitzer Prize (something she's been gunning for forever, blissfully ignorant of basic spelling). He beams at the thought until he discovers it's for an editorial titled 'Why the world doesn't need Superman.'

Also, as Olsen helpfully fills in, she's now engaged to the boss's nephew Richard (James Marsden) and while they have a son together, marriage is still not quite on the cards. Clark doesn't have too much time to ponder or mope, however, as we rush toward the pivotal staple of all Superman films: The Lois Save. This time, the reporter's on a malfunctioning space shuttle, cause enough for our man to part his hair the other way and un-tuck the cape. With a truly mighty flexing of special effects muscle, Superman saves the day, as expected. Only, he does it in a baseball field, ensuring more than a smattering of applause.

That's right, this one's a bit of a show-off. Superman hasn't been around for a while, and he looks like he's enjoying the spotlight. And why not? A definitive sense of posing-for-postcard vanity is one of the modern day Superman's few visible failings, and it adds believability to Brandon Routh's portrayal. 'How is the new boy?' you ask. 'Pretty good, actually,' I answer, knowing that all the young women are concentrating more on Pretty than Good. But merely being both isn't enough, and stepping into Christopher Reeve's big red boots is an impossibly daunting task. 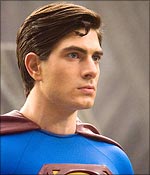 Routh, thankfully, doesn't try too hard. He's believably earnest, understandably gawky, and plays Clark and Superman rather straight. And while this relatively one-note performance might have critics missing the erstwhile Kal-El, I feel it's far better to get a realistic and likeable Superman right, rather than over-ambitiously attempting a Chris Reeve-style charmer. There will always be just one Reeve, goes without saying, but Brandon does rather well, getting the smirk down perfect.

It's easy as pie to get carried away by Routh's Superman and a wondrous, overwhelming set of special effects, and we find ourselves constantly bobbing our heads along to the immortal theme. While several composers have worked on the Superman films over the decades, John Williams' theme remains pristine and immortal, the crucial ingredient making sure Superman Returns feels just right. A great superhero film must have a great theme, and there really ain't any themes as super as this. Thank you, Mr Williams, you do it every time.

The film spans an ambitious storyline, and while not giving you any spoilers, I must confess it's startling in its scope and dramatic in progression. It takes the story forward by leaps and bounds, setting up not only Superman's return, but a potentially unbelievably story arc that will have fanboys drooling at the mouth. Wow. There's a lot that happens, and an awful lot that it sets up, and with the principal cast having signed up for three films, we better pray Singer enjoys himself as much in the sequels. The writing is sharp, the references are neat and iconic without being overdone, and many chuckle-inducing moments exist.

His old Oscar-winning pal Kevin Spacey is sure having a blast, playing shiny-headed Lex Luthor with unbridled glee. Spacey's version of Superman's real-estate loving nemesis is as charmingly Gene Hackman as it can be without being derivative, and the actor takes over the screen with his rampant, cornball villainy. Top actors have always loved playing supervillains, and Spacey camps it up very neatly indeed.

It's a well-cast film, proven strongly by Parker Posey as Luthor's dog-carrying aide, Kitty Kowalski. Posey carries off her role superbly, alternating between annoying and alluring with terrific ease, and being the perfect foil to Spacey's ruthless baldy. On the other hand, the film's leading woman is a massive disappointment. Kate Bosworth plays a depressingly straight Lois Lane, and while she gamely tries to gobble up Clark's sentences or pretend at spelling incompetence, we never quite buy it. She seems far too contrived, and the film works despite her, a pity because of Lois Lane's singular importance in Superman's world.

The rest of the cast is interesting. Sam Huntington makes for a great, enthusiastic Jimmy Olsen, and Frank Langella takes on Perry White with restrained ease. Kal Penn hands things wordlessly to other Luthor henchmen with bigger parts, and we're apparently supposed to be impressed. James Marsden is adequately vanilla to play Richard, but my favourite piece of casting has to be Noel Neill as the widow bequeathing her millions to Lex Luthor: the actress was the original Lois Lane, dating back to the 1948 Superman!

And oh, The Effects. Right from Superman's gentle glides off the ground to his fabulously fluttering cape, The Man of Steel has been visually reinvented for a new generation, and it shows. While the film's look remains excessively classical, a constant ode to the Donner film, the effects package is overwhelming. Flying? That's kidstuff. From typhoons in high seas to space shuttles wrenched off planes, Superman is as believable as he can possibly be, right down to the way a car roof crumbles when a planet (wink) rolls on top of it. That's $200 million very well spent, I think, and blockbusters don't get much bigger.

Or, as a matter of fact, longer. Weighing in at over 150 minutes, Superman Returns is a big, long film. The third act, while high on adrenaline-squeezing graphics and much drama, is essentially its weakest part, but that is inevitable. Superman has always had a weak conclusion, a third act that is a bit of a cop-out, and Singer's just following tradition. The story perennially heads towards a dramatic stacking up of odds against Superman, wherein the villain has seemingly managed to create a situation even Superman can't handle. It always ends with Superman eventually triumphant with inexplicable simplicity, just 'cause he's super, man.

But, hey, he is. Superman Returns is a staggering film, a poetic thrill-ride that reunites us with the Man Of Steel, making us realise just how much we've missed Clark Kent. This is a tough ask, a monumental film to make, and one extremely easy to get wrong. Bryan Singer, thankfully, has been a helluva loyal fanboy, and his love for the subject shows at every step. I've seen it twice over two days, and am going again this weekend. You should, too. Undoubtedly, the big-screen film of the year.

The Greatest Superhero films. Ever.