The return of Malgudi Days

Malgudi Days, directed by the late Shankar Nag, was a phenomenon when it first appeared on Doordarshan in the 80s. The author, R K Narayan, had once described Malgudi as a town "habited by timeless characters who could be living anywhere in the world."

Everything about Malgudi Days was exemplary -- the amazing stories, the sketches by R K Laxman, Shankar Nag's direction, excellent performances by some of the most talented actors in Indian cinema, and mind-blowing music by T S Vaidyanathan. Even today, those who have read the books and seen the serial remember every nuance fondly.

So, when National Award-winning filmmaker Kavitha Lankesh was offered a chance to direct Malgudi Days for Doordarshan once again, after nearly two decades, it was a huge burden on her shoulders. She had to live up to the standards set by Shankar Nag.

In an exclusive interview to R G Vijayasarathy, Lankesh talks about the challenges she faced.

On how Malgudi Days happened

When veteran producer T N Narasimhan approached me with the offer, I wasn't in a position to agree immediately. I had just come out of a lull in my creative activities and had given birth to a child. When I found some free time, I thought of directing another film, for which I was preparing a script. I was also in search of some good plots. Directing a TV serial was not in my mind because I had always assumed film, as a medium, provided me greater challenges and a higher level of freedom. Still, this was an offer I couldn't refuse.

T N Narsimhan is a tough taskmaster. For his age, he has been tremendously active and has the right spirit for good projects. He promised me complete freedom to select the stories as well as the cast and crew.

On why she accepted Malgudi Days

I often wonder what made me accept the offer. Maybe I did because it was an opportunity for me to interpret the works of my favourite writer. I also thought it was the best vehicle to prove my talent to an intelligent audience. To be precise, I wanted to make a mark like Shankar Nag did.

I was a great fan of his from my younger days. I had his entire collection. My father P Lankesh, an eminent writer of Kannada literature, was an English professor at Bangalore University and had his own library from where I used to borrow books. When I began earning money, the first thing I did was purchase a set of Narayan's books for myself.

He was one of my favourite directors, but he wasn't an intimidating factor for me. I was a little apprehensive about getting such fine actors to perform in my serial. I was working in a different type of environment; the culture of working has changed now. Still, I thought I had to give the project my best, considering it was based on stories by my favourite writer.

On selecting the stories

To select 15 stories was quite challenging. I had to select new stories, as tales from Swamy and Friends had been done by Shankar Nag. So, I had to read all the works of Narayan again and took stories like Lawley Road, Snake Song, Salt and Sawdust.

On selecting the actors, and Anant Nag

The responsibility of selecting the right cast also fell on me. Thankfully, I had a good equation with an amazing actor like Anant Nag. I was just a child when he acted in my father's directorial venture, Anuroopa, and my father was very appreciative of his performances. When I became a full-fledged director, I zeroed in on him for the lead role in Preethi Prema Pranaya, but I also knew he was a hard taskmaster. I went to him with a bound script and told him everything in detail. He did it and won appreciation for his performance.

I thought Anant would fit the role for stories like Lawley Road and Snake Song. I opted for another veteran actor, Sundar Raj, for Salt and Sawdust. I also took some artists from Ninaasam and others from theatre. 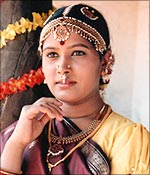 Shankar Nag had a team of dedicated youngsters who were passionate about working with him. I don't say my technicians and team aren't passionate, but getting the right people is much more difficult today.

I had to face another unexpected challenge -- globalisation and reforms have completely transformed the ambience and structure of our rural life. When Shankar Nag shot in Agumbe and other peripheral villages two decades ago, there were barely two to three vehicles plying the main roads. When I was shooting in Agumbe, there were more than 250 vehicles on the streets. Also, there were only a few places that remotely looked like the housing structures described in Malgudi Days. The shooting took more time, as we had to clear traffic before any shot was taken. Still, we did our best in those circumstances.

On the response so far

I am getting a positive response. You should know that, when Shankar Nag directed the serial, there were more black and while TV sets and no private channels to compete with Doordarshan. Of course, Nag's efforts were also classy. Things are different now, yet the reactions I have been getting are wonderful. I think my efforts have been widely appreciated.