The Killer: An okay Collateral copy

The latest from the Mahesh Bhatt stable, The Killer is a story about a carefree taxi driver Nikhil (Emraan Hashmi) and a cold-blooded contract killer Shekhar (Irrfan).

Shekhar is hired by an underworld don to bum off five witnesses. To complete his task, he comes to Dubai, hires a taxi and goes about doing his 'job.'

The story is a straight lift from the Hollywood movie Collateral. But that's where the similarity ends.

While Collateral was taut almost throughout, the tempo of The Killer picks up only when Shekhar and Nikhil meet.

Thereafter though, the pace of the narrative is quite rapid. Irrfan's cool detachment and his funny conversations with the taxi driver build up a definite chemistry between them. Their quirky verbal exchanges add to the pace and substance of the movie.

Nikhil is so street-savvy that he can predict the exact time he would take to reach a destination. Shekhar completes his first task easily and the driver does not smell a rat. When he kills the second witness, the body lands bang on the windshield of Nikhil's taxi. It leaves the jovial cabbie shocked.

Shekhar's gun forces Nikhil to become an accomplice. Nikhil, justifiably, is distraught. Overcome with fear and shock, he laughs and sobs at the same time. Can this forced duo pull of the murders? Watch the movie to find out. Unless you have already seen Collateral.

The scenes where Irrfan kills the witnesses, and when the Central Bureau of Investigation cop and the Dubai police interact are not very catchy.

The witnesses look like they are waiting to be shot. Nobody really puts up a fight or puts any energy into their roles, apart from the witness who plays a singer. You hate Irrfan only when he kills this guy. Otherwise Irrfan's charm -- and that steady grin -- makes you like this hired killer.

My favourite scene in the movie is the one where Nikhil meets the don and tries to convince him that he is the killer. 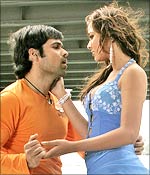 Given good lines and when directed well, Emraan can do a great job. And -- this might disappoint some Emraan fans -- this is the first film where he does not bank on the kiss factor. There are no lip locks.

The sad part is there is no chemistry either between him and Nisha Kothari.

The 'insert pretty girl with an item number' formula does not work. And the opening song set in a Dubai dance bar is nothing but vulgar.

Nisha has already failed to deliver in the Ram Gopal Varma camp. She could not prove her mettle with the Bhatts too. In fact the bitter taste that she left with her minimal screen presence in the movie could have easily taken the film down if it was not for the charismatic Irrfan-Emraan duo.

In Collateral too the damsel in distress Jada Pinkett Smith had a small role. But unlike Nisha who only flashes fake smiles, cries fake tears and bares her nothing-to-write-home-about body, Smith played her role with conviction.

The dark element of the film is very well brought out as it is shot mostly in the nights. However, the scenes towards the end of the movie are very loose and unimpressive. They lack the skill needed to wind up a story.

The only song that really had my foot tapping was Hibbaki.

To borrow an Emraan line from the movie, 'correct bolun toh' the Emraan-Irrfan duo get 100 out of 100, and the film gets just 50.

'Killer was inspired by Collateral'