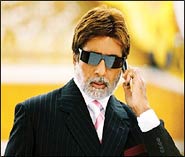 Question: How could a director like Raj Kumar Santoshi make the utter tripe that is Family?

Now, that's a tough one.

On the one hand, we can look at his solid credibility over the years, and a track record that boasts of films like Damini and Andaz Apna Apna, nod our heads silently and assume he's just another old-timer director trying and failing to make the transition to the new, slick Indian cinema. In which case we ought all feel sorry for him, be polite and just avoid Family, without going on and on about how ghastly it is.

Another thing we could do, though, is leave the speculated sympathy behind and bring in a dose of cold cynicism -- which is always a good idea when it comes to Bollywood. We could consider the fact that Family, produced in part by Keshu Ramsay, is a film made to showcase his debutant son, Aryeman. The producer, hailing from an Old Bollywood family, wangled an A-list director and stars (Amitabh Bachchan, Akshay Kumar) for junior's launch, and they just went through the motions after pocketing fat paychecks. In which case we should trash it mercilessly.

I'd like to subscribe to the latter theory. For some reason, it's a lot more heartening to think of Santoshi ignoring Family and letting one of his lackeys loose at the helm than to imagine him having directorially lost it. Therefore, let the slaughter begin.

One of the most confused films in ages, Family flip-flops between 'epic' crime saga and inane smiley-family-movie, making a hash of every genre it attempts to wade into. Not short (why? why??) of ambition, the movie tries a little bit of everything. It does this in a painfully sporadic manner, with absolutely no narrative flow as badly acted and disjointed scenes are indiscriminately pasted together in a cruel collage of cliché.

Sushant Singh, a violent youth  in the first scene of the film  kills a guy in a drunken bar brawl. Murder done, he sneers and flies off to Dubai, where his father, the Don, can save him. Immediately after that, as the credits roll, we're 'treated' to Quick Bite, a ridiculous song featuring Akshay as a dancing cook, juggling plates and chopping cucumbers to entertain customers. Sounds random? You can't begin to imagine my headache. And this is just the beginning.

Even as Akki bends ladles and falls for husband-hunting Bhoomika Chawla, the film introduces his good-for-nothing kid brother Aryeman, loafing around in cybercafes and getting into trouble. The dialogues are painful, and anyone watching the film has every right to threaten screenwriter Shreedhar Raghavan with bodily harm. He's the man still enjoying the applause from his last film, Bluffmaster.

That's the most frustrating thing about Family. The names, by themselves, are impressive, yet none of them deliver. Amitabh inexplicably keeps licking his chops; Akshay looks bored and, as a result, overacts; Shernaz Patel, the best thing in Black, is hard to stand; and Sushant, an otherwise talented young actor, is irritatingly over the top. Believe it or not, Bhoomika actually emerges the best among the lot.

Getting back to the film itself, Bachchan plays Sushant's father, Biren Sahi, a nefarious Dubai-based baddie with immaculately tailored black and white suits and a very hip pair of shades. He's a villain with a hands-on approach, you know, the kind who prefers to gun down his enemies in the middle of a crowded movie theatre, despite very bad aim. Also, Amitji, we like you and all, but -- just a suggestion -- perhaps you shouldn't contort your face as much every time you pull the trigger. You end up looking a lot less Sean-Connery-cool than you obviously want to.

A misguided bullet finds the back of do-gooder Akshay Kumar, and, just to make sure he's left no witnesses, Bachchan kills him and drives away, possibly in a rush to buy some more cigars. Aryeman, stunned by the sight of Bhoomika in widow-white, vows revenge, and decides to kill Bachchan. Since no one can quite find the crime boss, he decides to simply abduct his family and call him out.

So, he does. Yes, that's right. A young lad with a bunch of committed friends takes Biren Sahi's family hostage. Imagine, if you will, Dawood's kith and kin, men of the world like Noora and Anees Ibrahim, kidnapped by a bunch of inexperienced college kids. Much melodrama ensues, and little Aryeman tries to walk like a leading man, mouthing 70s Amitabh dialogues about death, brothers and revenge. Hmmm. Perhaps Kader Khan's presence in the film wasn't limited to a fleeting appearance after all.

The film drags on and on, predictable and filled with irrelevant, badly executed action scenes. Aryeman is a dolt with one of those disastrous cinematic debuts best left forgotten. Bad editing further reduces his attempts at heroism to amateurish levels, especially as he flies into a building. The characters are cardboard, the story is hackneyed, the stretched climax anything but engaging. The overall result? A film too bad to even laugh at.

If this is Family, we're better off alone.