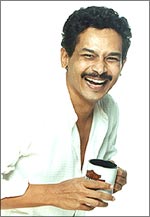 Two-time National Award winner Atul Kulkarni -- whose role as Laxman Pandey, the angry young right-wing guy in Rang De Basanti, has won him critical kudos yet again  is all praise for Aamir Khan.

"On the sets, it's difficult to separate the actor from the person. For Aamir, the script and director are dear. He will not hesitate to give his line to another actor if it suits the other character better," says Kulkarni, who worked with Aamir for the first time in Rakeysh Omprakash Mehra's hit film.

"To me, Rang de is a very honest film that reaches the audience and has the potential to influence young people with different temperaments," says the actor who has featured in films like Hey Ram (which won him his first National Award for Best Supporting Actor), Chandni Bar, Dum, Satta, 88 Antop Hill, Khakee and Page 3 (which won him his second National award).

"It (Rang De) makes everyone think. The way you react may depend on your experience and philosophy of life, of what you are, how you have been brought up. Everyone can identify with it. Rang De does not end there (with the last scene) it's a beginning in a way," Kulkarni continues.

"To prepare for Rang De Basanti, Rakeysh gave me biographies and the autobiography of (freedom fighter) Ram Prasad Bismil. His autobiography was smuggled out of prison a few days before he was hanged," says Kulkarni, who was born in Belgaum, Karnataka and grew up performing in school plays.

"I was an introvert, and my parents used to worry about my future. I preferred to stay home than go out to play. I would read a lot, something I still do a lot," says Kulkarni.

Apart from reading and acting, Kulkarni loves travelling "just for the heck of it".

"It doesn't matter what the destination is, I enjoy the process of travelling. I like being with nature, meeting local people in different cities and villages, tasting their cuisines and knowing them better. Of my travels, the most I enjoyed were the ones in Konkan areas. I normally take off with a group of about 10 to 15 friends from my institute days and some people I have worked with," he says.

Incidentally, his parents tried to make an engineer out of him. "Much against my wishes, I was enrolled into an engineering college in Pune where I appeared for the first year exam three times," reminisces Kulkarni.

"I quit engineering after that and was back home. Post that I took up arts, the stream I was interested in, and topped (college) at the graduation level. Things started getting better (after that)," he adds.

While working in an insurance company, he took part in a comedy play at a cultural gathering. And found his calling. He joined Natya Aradhana, an amateur theatre group in Solapur.

"Natya Aradhana groomed me as an actor under the able stewardship of Dr Waman Degaonkar. I worked backstage for two years and then got a chance to act. These years of serious theatre ignited the passion for theatre and brought out the actor in me," says Kulkarni.

He completed his course at the National School of Drama in New Delhi in 1995, at the age of 30. Since then he has acted in eight plays in four languages, 26 films in six languages and won several awards.

Kulkarni is currently working on a Telugu film called Ram with N Shankar. Next up is a Marathi film called Matimaay by Chitra Palekar, which is due to release by March end. The film also features Nandita Das.